I am a big fan of horror, from films like The Thing to Event Horizon and games like Dead Space and F.E.A.R, all of them have opportunities to do something creative with their concepts. Aliens, ghosts, and all manner of things that go bump in the night, can and do make their way into the realms of horror. But in recent years I have noticed a trend in which horrors seem to have really lost their creativity. 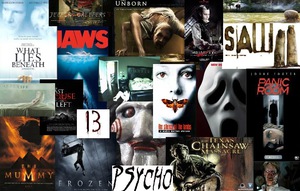 In the 1970s and throughout the 80s, horror was being bombarded by dozens of films that gave cinema audiences zombies, invincible serial killers, incarnations of the devil, cannibals and killer animals. However, in recent years the horror genre seems to have lost direction, with remakes of classic films like Halloween and Friday 13th being rebooted in an attempt to breathe life back into dead genres.

Now what I want to know is why has this become a trend??

As long as people have been making films, directors and writers have been trying to scare their audiences. In the days of black and white films, film makers were limited in what they could do. Dracula, the Wolfman and Frankenstein’s Monster were still fresh and original but it was not until the late 60s when gore was introduced to the world that horror entered its ‘splatter’ era. Following that there was an explosion of graphic horror films depicting people being killed in various nasty ways. Some of these were so shocking and grotesque that they were banned and in extreme circumstances the film makers were brought up on criminal charges as the gore looked so real, people thought it was real, Cannibal Holocaust in 1980 was a prime example of this.

Since the late 60s, writers and directors started churning out so many horror films that it is impossible to name them all. In the 1970s and 80s the ‘slasher’ horror was one of the most prominent features of the genre, and the most influential films that spawned numerous sequels were Halloween (1978), Friday 13th (1980), and of course Nightmare on Elm Street (1984). 1973 saw The Exorcist hit screens and the late 1970s also saw the introduction of a saliva drooling monster that terrorised the crew of a spaceship in Alien (1978). Audiences were so terrified by some films that there were cases when ambulances were on standby to deal with traumatised viewers.

When did creativity die??

Alien was rereleased in cinemas a few years ago in a new directors cut version, however, it failed to terrify an audience that has become used to gore and sci-fi horror. The classic slasher films have been or are also being remade, Halloween (2007), Friday 13th (2009) and Nightmare on Elm Street (2010). However, none of them really did anything new or original with their concepts so as they had already spawned numerous sequels, what was the purpose of doing a reboot if the ideas in the remake were the same as those in the original??

In the late 1990s things started to get a little more interesting again with The Blair Witch Project  in 1999. This was a film that shook cinema audiences to their core mainly because the hype surrounding it led many people to believe that it was actually true and the footage was indeed real. The idea of using handheld cameras to film horrifying situations was new and innovative and led to films such as Diary of the Dead (2007) and Cloverfield (2008) which used a similar technique but of course then this became the flavour of the time.

To me, it seems that in recent years film makers are staying within the established rules and the comfort zone of the genre. In the 60s through to the late 90s writers and directors were pushing the boundaries with new ways of portraying horror. Unfortunately, at the moment cinema goers are left to watch films that are so-called ‘reinventions’ of classic films. Rob Zombie’s take on Halloween and the background of Michael Myers may have been interesting, but inevitably the film descended into a deranged killer chasing pretty teens around and murdering them…same old shit we’ve seen over, and over, and over again…

Halloween, Friday 13th, Nightmare on Elm Street and Hellraiser (to name just a few) led to profitable franchises that died off because they became repetitive and audiences were simply tired of watching the same thing happening in each film. These franchises ran their course and then died off. Surely horror writers and directors should be trying to give their audience something new rather than resurrecting franchises that have had their time on screen and subsequently disappeared.

They are either remakes, or they are a collection of different ideas jammed together.

For example, Pandorum (2009) is a horror film that takes place on board a spaceship that has elements of Ghosts of Mars, Dead Space (a computer game), and Event Horizon. It is entertaining enough but it is nothing that the audience won’t have seen before so it will not stand the test of time.

The Resident Evil films were about zombies (zombies that were created by a virus) but those zombies still followed the rules set by George A. Romero and were slow, stupid and a bite would lead to someone becoming one.

Psychological horrors also follow similar ideas with creepy spooks trying to kill people (The Messengers, The Ring, and The Grudge are good examples) and generally children have some link to them.

Unfortunately, the same audiences that demand something new are the same ones to criticise an original idea. In 28 Days Later, whilst some of the ideas were familiar (people being infected by a virus) with the rage-infected population giving audiences a new slant on the zombie genre. But, many people criticised the film because the ‘zombies’ in it were fast and aggressive, something that zombies are not supposed to be.

Horror hasn’t given audiences anything really groundbreaking for a long time, and this could be because there are so many horror films out there. However, the abundance of films presents an opportunity for writers and directors to really screw around with the established rules in order to make something truly original.

In my opinion there are so few decent horror films out there, and the ones that are simply seem to be a remake, a reimagining or just a straight up reboot. These days people want something different, they want to be challenged, and a horror about somebody getting ripped to shreds has been done (if you’ll pardon the pun) to death.