Moby Dick was first published in 1851 by Herman Melville during the American Renaissance and gave literature the character of Captain Ahab, a man driven to obsessively hunt down and destroy a terrifying White Sperm Whale known as Moby Dick. The book has been adapted into various films over the years, however, here it is going to be the original novel that I am going to be taking a look at.

Moby Dick Cover (one of the designs anyway)

For those of you who have a kindle let me lay a little wisdom down upon you, if the copyright of a novel has expired you can download  said novel or short story for free. After discovering this, I decided to better myself by reading some of the classics of literature like The Strange Case of Dr Jekyll and Mr Hyde, A Picture of Dorian Grey, War of the Worlds and several others. I have enjoyed some of these more than others naturally but each one has helped to define or even create a genre, so even if I didn’t necessarily care for the story I can appreciate the contribution it has made to modern human literature. I eagerly awaited reading the next one to see what treats lay in store....it was with this eagerness that I began Moby Dick.

After reading so many magnificent stories how the donkey bollocking hell has THIS become a classic???? Now I have read my share of crap books over the years, Twilight and 50 Shades of Grey instantly spring to mind, but most I have at least made it to the end, in fact there are only three books that I have cast aside unfinished. If you are curious, those books were The Game, 2012 Crystal Skull and of course Fifty Shades of Shit...sorry...I mean Grey

The focus of Moby Dick is on Captain Ahab and his obsession with hunting down a great white whale that crippled him, a quest which ultimately leads to the destruction of both the man and his ship. Actually, no that is a mistake, the focus of the story is actually the narrator who decides to tell the reader, each and every detail of his experience aboard a whaling ship no matter how dull, tedious, or downright painful that description would be. But, you may be asking yourself, a quest for vengeance against an aggressive white whale, renowned the world over for being capable of destroying whaling ships and killing their crews, this would have be pretty exciting right??…right??

The story is told from the perspective of...actually he is so dull I can't even remember his name, and the simple fact of the matter is that he will not use one word when thirty will do. He spent at least forty (yes forty) pages talking about the fact that he was worried about that he'd have to share a room and bed with another man, that is forty agonising and mind-numbing pages!! Do you know how this was resolved?? When he meets the guy he finds him to be very pleasant company so they spend the rest of the book happily sharing a bed and spooning…that’s it…there is no payoff, it is simply forty pages of drivel and then nothing.

After around a 150 pages in we're just being introduced to Captain Ahab who is hardly seen at this point and around the 250 mark the infamous white whale has been mentioned, let me make that point very clear, Moby Dick has been mentioned and by the time I cast the book aside we still had not set eyes on the albino sperm whale with the bad temper.

I have never struggled so much with a book in my life, I've read hard going books, but never anything as tedious as this. NOTHING happens, in one chapter are the dictionary definitions of what the different whales are, maybe when this was written that was necessary, but we have Animal Planet now so I know what a fucking whale is!!! How, how, has this become a classic?? Why do so many other famous characters paraphrase this novel or draw parallels between themselves and Captain Ahab??

In Star Trek II: The Wrath of Khan, Khan quoted paraphrased passages from this book during his pursuit of Kirk, now Khan was a genetically engineered superman so perhaps his genetics gave his brain the necessary power to deal with the mind-numbing tedium of the novel. But then Picard also notes that he is becoming like Captain Ahab in Star Trek IV: First Contact when he realises that he is becoming obsessed with destroying the Borg assimilating the Enterprise…he is a captain of legend in the Federation but perhaps one of the reasons he is legendary is because he was able to make it through this shit without going insane…

Sorry I have wandered from the point a smidge…the point is that what Moby Dick badly needs is an editor, someone to cut out all the bullshit, which from what I've read so far would reduce the page number from around 550ish to maybe a sentence: "Man fights whale, gets killed by said whale" - that was 8 words.

I knew when I hit the 150 page mark and my brains were dribbling out of my ears through sheer boredom that I needed to either stop reading or take my ship into orbit and bombard a city or two just to cheer myself up. I opted for the former rather than the latter because whilst my ship is powerful enough to take on one Nation’s military, I doubt that it could stand up to the combined might of all the world’s nations..I doubt, doesn’t mean it couldn’t. Anyway after putting down Moby Dick I read a fast paced action packed novel called Shimmer bristling with interesting characters, an exciting plot, cutting edge sci-fi by a lesser known but clearly talented author.....okay I'm talking about a novel I have written (yes I do other things you know) which you should all totally read when I actually get round to publishing it on this very site.

I am determined to finish this book one day so perhaps another review will have the final half of the story  and show why this is considered a classic but I seriously doubt it....I'm trying to keep an open mind so maybe it'll be good in the end and maybe my people will finally pick up the phone, fly over here and wipe out humanity…hey, I can dream…still after thirty years of hanging on I am not about to hang up any time soon so perhaps when I have read and watched everything else you humans have created I’ll have no choice but to return to Moby Dick…but god I hope it doesn’t come to that…

So for giving literature one of the most iconic characters ever should I still give Moby Dick a Thumbs Up?? Is that single character worth rating the book better?? No, sorry Ahab but the means by which you were introduced to the world is so utterly painful that there is no way I can possibly give the overall story anything left than a massive Thumbs Down. 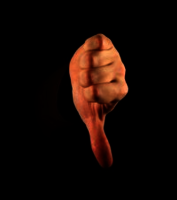 2/10 - I am giving Moby Dick a 2/10 for giving the world Captain Ahab, and for no other reason at all. I couldn't make it all the way through but maybe you will and if the doctors find you I truly hope they return you to the institution you've escaped from. Trust me, if you want to read a classic of literature then for the love of god read anything other than Moby Dick