The first half was published in a series between 1881 and 1882 by Italian author Carlo Collodi under the title The Tale of a Puppet. It was later completed as a full novel for children in 1883 now called The Adventures of Pinocchio. It serves as something of a cautionary tale for children on the consequences of what happens to those who lie, cheat, steal and are generally wicked.

The Adventures of Pinocchio Cover

Originally this week I was planning on writing an article about the Third Street Saints as my previous review was of Saints Row IV and I wanted to expand on that by discussing the evolution of that Saints Row games. However, then I started reading The Adventures of Pinocchio and now have to talk about that, so my review of the Saints Row series will have to wait.

I am going to seemingly wander from the point for a moment but you’ll soon see that it has relevance. Abbie recently discovered an app called Disney Life which costs £5 a month and allows the entire Disney library to be at our fingertips (this is not an add for the app by the way). So over the last few weeks we have been disagreeing on what Disney films to watch, personally I prefer the classics like Dumbo, Alice in Wonderland, Jungle Book and of course Pinocchio with Abbie favouring…[shudder]…High School Musical and its sequels. I knew that many Disney films are based on older works of fiction that do not necessarily have the happy endings that happen in the Disney animations. Curious about the original source materials I have downloaded both Tarzan of the Apes and The Adventures of Pinocchio just to see what the stories the films were based on we like…and oh my God is The Adventures of Pinocchio messed up…

In the beginning the piece of wood that would ultimately becoming a marionette named Pinocchio is already somehow self-aware. The block of wood is due to be cut up by a carpenter named Master Antonio, but it cries out in pain as he tries to carve it up. Frightened by the talking log Anotnio gives it to his neighbour Geppetto, a extremely poor man who makes a meagre living as a puppeteer. It is Geppetto who carves the wood into a marionette and names it Pinocchio.

Before he has even finished his work the puppet is very mischievous, and the moment the puppeteer has carved his legs, it proceeds to kick Gepetto. Once he is finished the puppet runs out into the street where he encounters a carabiniere (basically a policeman) who believes that Geppetto has mistreated him throws the old man in prison.

Pinocchio returns home and encounters a Talking Cricket that has lived in the house for over a century. The Cricket warns the puppet of the perils of disobedience and hedonism, but Pinocchio ignores the warning, and even throws a hammer at the cricket, striking and killing it. After falling asleep in front of the fire he awakens to discover his feet have completely burned off. Geppetto is released from prison and after Pinocchio begs for forgiveness, and promises to be good from now on, makes the puppet some new feet. Selling his own overcoat in order to by his wooden-son a school book, Geppetto sends him off to school to gain a decent education.

On the way to school his passes the Great Marionette Theatre and sells his schoolbook in order to buy a ticket. The other living marionettes in the show call out to him angering the show’s owner who initially decides to burn Pinocchio as firewood. He relents and instead gives the puppet five gold pieces to give to his father and sends him home.

On the way he encounters a Fox and Cat, the Cat pretends to be blind and the Fox pretends to be lame, they trick Pinocchio into planting his gold coins in the Field of Miracles where they will grow overnight turning into over two thousand. A white blackbird attempts to warn Pinocchio of their deception but the bird is eaten by the cat and the puppet ignores its advice.

Later he is attacked by bandits and as they are unable to get his remaining coins from him, they hang him up by a tree to wait for him to die. The puppet survives this encounter and is helped by a friendly Fairy but unfortunately despite everything that he has gone through he still has not learned his lesson…

Okay now the first thing that you need to be aware of (if it wasn’t obvious by my brief gist of what is happening) this book is really messed up. The majority of people Pinocchio encounters either try to trick him, beat him, rob him, or straight up murder him. Plus the titular puppet himself is a real bastard most of the time. Before he is even finished he has kicked Geppetto the moment he has feet with which to do so, he also has the old man thrown in prison for basically no reason. Far from being charmingly mischievous or just naive this Pinocchio probably should have been thrown on the fire before he was even finished as he causes so much pain and heartache for those around him. I mean for crying out loud he kills the Talking Cricket (you know his conscience Jimmy Cricket in the film) and watches the Cat devour a bird that is also just trying to warn him of the consequences of his actions.

In the original text Pinocchio actually dies at the end when he is hung by the Fox and Cat from an oak tree for refusing to hand over his final gold pieces. The puppet being suspended from the tree and being left for dead is in the book, but it continues on after this point so perhaps this is where Collodi originally finished the narrative. The story was not originally going to have a happy ending with Pinocchio becoming a real boy and was written as a tragedy.

The Fairy appears throughout the story and more than once Pinocchio’s actions lead him to believe that she may have died of sorrow because of things that he has done. However, it doesn’t stop him from being lead astray time, and time again.

If you’ve seen the 1940 Disney film then the gist of what happens in the book also happens there, he meets the Fox and the Cat, he goes to the Marionette Theatre (having been sold to its owner rather than just going to watch), his nose grows when he lies, ending up at a place where naughty boys turn into donkeys and he finally gets swallowed by a giant shark (a whale in the film) that has also eaten his father Geppetto so it is easy to see why some elements of the story were adopted in the film and other were ignored.

When I was reading the book Abbie kept noting that I would constantly chuckle to myself at how brutal things would sometimes get. Pinocchio kills the Talking Cricket by throwing a hammer at him. He gets Geppetto arrested. After convincing Pinocchio to come with them the Fox and the Cat trick him into buying them a huge meal and then adopt disguises as bandits in order to rob him. Pinocchio fights back and actually bites off the Cat’s hand. When he encounters them later and the Cat is missing a paw he doesn’t twig that they are the ones who tried to rob him. When he reports that his gold coins have been stolen after he buried them the judge instead decides to throw him in prison…I have no idea how the law worked in the 1880s Italy but I would assume if you were the victim of a robbery you wouldn’t end up being the one jailed. He is nearly murdered by various different people again and again, and still he doesn’t learn his lesson.

The Fairy treats, and loves him, like a younger brother and tells him that if he is good honest, goes to school, and works hard for a whole year he will become a real boy. But on the eve of becoming a real boy, his school friend Lamp-Wick convinces him to go to Toyland where boys can do what they want, when they want, and with no consequences. Pinocchio goes with him, and a group of boys. The man running the show seems friendly and charming, even after biting off the ears of a donkey whispering warnings to the puppet, and Pinocchio accompanies the caravan to Toyland. So after being promised that he will become human after a year of hard work he decides, on the eve of his reward, to throw away all his hard work and risk killing the Fairy with sorrow who treated him with nothing but kindness.

Honestly just how messed up this book was by comparison to the Disney film I was familiar with made me smile. Pinocchio is not a charming, but naïve character here, in this book he is a right little bastard that should never have been given form. Plus he is also not the only living puppet in the world and the majority of things that befall him are down to himself not doing what he is supposed to do.

I have to admit I did like the book and would recommend it. If you are a fan of the Disney classic then you are going to be surprised by the brutality here and how fucked up a character the little wooden puppet actually is to begin with. Yes he learns to behave and be a good boy, but he doesn’t half go the long way around to get there, and encounters many hardships and pains along the way.

I will give The Adventures of Pinocchio a Thumbs Up because I was thoroughly entertained by it all the way through. Even though bizarrely there is a little summary of the chapter you are about to read which does give away a few spoilers. 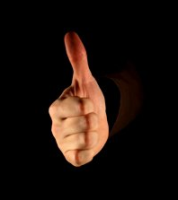 8/10 – I was amused by just how messed up this book could be at times and seeing the characters from the Disney classic in their true forms was thoroughly entertaining. I can understand why this book has inspired so many variations and retellings over the years so like I said before I urge anyone to give it a read.