I have tried to look at the two series independently of each other and rated them on their own pros and cons rather than comparing them, and I think, even if I do say so myself, I have given them both fair reviews and shared my honest opinions on both.

But now we have hit a wall…and a question has been posed.

This is the same question that must have been posed following Spiderman 3, trying to do too much with so little actually happening which really stopped that film in its tracks, but as the X-Men films have proven, there can be weaker instalments but as long as you can still deliver the goods then the fans will stick with you during the weaker additions to the franchise. There was originally going to be another trilogy of films surrounding Tobey Maguire’s Spiderman before plans broke down and ultimately it was decided that the whole franchise would be rebooted with The Amazing Spider-Man.

Now it seems we are back in the same boat we were in back in 2007, with the poor Spiderman 3 ringing in our ears, audiences were left to wonder where the future for the web-slinger would lie, and it seems, that like the previous version this incarnation of Spider-Man has spun his last web.

The Marvel Cinematic Universe has dared to create a universe in which individual films fit into a much wider world…or universe…if you will. In the comics Spider-Man is also very much a part of this world, however, due to different studios owning the rights to the character it seemed unlikely that we were going to see Spider-Man appearing alongside Iron Man or Thor. However, now it seems that the web-head is going to appear in Captain America: Civil War due for release in 2016 but this is not going to be a continuation of any Spider-Man we have seen so far.

So we are in for another reboot – A new actor is going to step into the suit and we will see Spider-Men entering the Marvel Cinematic Universe.

I think that this topic is going to be the subject of a TAC Reviews…What’s on my Mind discussion/rant at some point but as far as Spider-Man is concerned…Stop doing this…I will freely admit that Spiderman 3 was embarrassing and The Amazing Spider-Man 2 left me as frustrated as a guy that calls dial-a-hooker who took three hours to turn up and then turned out to be a bloke (again with the sex references with regards to that film, seriously, what is wrong with me??).

But, I didn’t want the franchise to stop here, give me a Sinister Six film, or better yet look at The Animated Series or The Spectacular Spider-Man and learn from them. How cool would it be if we discovered that Oscorp was actually being controlled from the sides lines by the Kingpin?? Wouldn’t that fit into the Spider-Man world?? Kingpin in The Animated Series was always being made fun of by the web-head who would frequently refer to him as being fat, but then in one episode Kingpin grabs hold of him, and tells him that “approximately one percent of my body mass if fat…allow me to show you what three hundred pounds of muscle can do” before almost crashing Spider-Man to death with his bare hands. Why can’t we see that?? A smart and psychically imposing enemy that is not dosed up on some muscle enhancers or mechanical augmentations that had been in the background the whole time could be amazing if done right.

Everything I said in my review of The Amazing Spider-Man 2 regarding where I thought they were going to do were way better than anything that actually did, and if I can think of something better to do with these characters why can’t professional writers or people really into the comics??

I would have liked to have seen another Amazing Spider-Man if only to see it hopefully live up to its own potential but sadly it seems that it not going to be…I wonder if next time we’ll only get one attempt at a Spider-Man movie before it gets another Reboot, and if that happens what next?? Spider-Man shorts?? Or will the web-slinger be cast onto the floor of the Hollywood cutting room never to return again?? 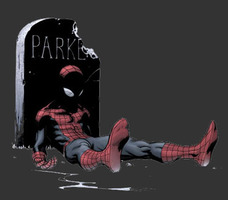 Could this actually happen??

I think that we can take comfort from the fact that even if the film is cringe-inducing like Spiderman 3 or such a waste like The Amazing Spider-Man 2  it can generally be relied on to make money so it is unlikely that we’ll never see another incarnation of the web-head in the future but will it be good??

Now that is the question...

Spiderman 2 showed us that Spider-Man can be great on the Big Screen and hopefully he will be again.