I have touched upon this topic a few times during my various reviews but I think it was during the review of Jurassic World in which I did something of a side by side comparison of a practical effect Vs a CGI effect. During my review of Labyrinth the use of practical effects Vs Computer Generated Images really started to rattle around my brain, so I have decided to take a look at both of these techniques and see which one holds up over the other. 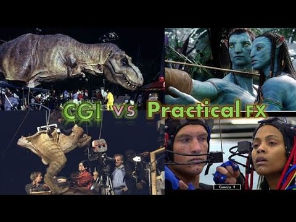 This seems to be a question that is open up to some debate amongst artists as well as fans, with the ever increasing developments in computer generated technology films are becoming increasingly overwhelmed by CGI effects rather than practical effects. The question is though, is one better than the other?? Why were films of the past made up of practical effects and now the trend is to go completely CGI??

Back in the 1960s, 1970s and 1980s computer generated technology did not really exist and film makers had to rely on established methods such as stop motion to bring their creations to life. The technique involved altering an object a small amount a frame at a time, thus creating the impression that something is moving This technique was used in Jason and the Argonauts in 1963 and was still being utilised by the time Clash of the Titans was released in 1981. It was a tried and tested technology and yes you were always aware that the creation wasn’t real and yet the models used for this process could be ridiculously detailed. Plus as the objects were physically there the way the light moved on them made them appear more “alive”.

Puppets and people in consumes were also being used. The Alien from Alien is a guy in a suit, and the shark in Jaws was a huge rubber model, now skilled filmmakers like Ridley Scott (this is from before his films seemed to get increasingly shit) and Stephen Spielberg knew that if the effects were not the best then the most effective way to use them was sparingly. Therefore they only show glimpses of them throughout the majority of the film. You can count the amount of times you actually see the shark in Jaws before the film shifts to the Orca on one hand, the films is seen from the perspective of the shark a lot, which adds to the tension. Likewise with the Alien, the glimpses of it are fleeting, you don’t know what it looks like, which adds to the fear because you don’t see a bloke in a suit, you see a monstrous Alien creature.

Models were also utilised, highly detailed models that were used to create the illusion that the audience are seeing something that is really there, which you actually are. Take a look at the picture below…

Do you see the difference, in 1983 numerous props and models of varying size, all being used to create the Star Wars universe and making it feel alive. Then jump to 2005 and there is none of that, just a bloke (George Lucas) standing in front of a green screen. So the images that we are seeing in 2005 are all generated by computers and none of them are actual effects that have been painstakingly created by skilled craftsmen and women.

The thing is that as technology has improved the cost of having something being computer generated has gotten less whereas the cost of building physical sets and props has only increased. The people who would be working on models or puppets are in the minority as that kind of filmmaking is becoming a lost art. Why spend millions of dollars on designing, building and operating a huge puppet dinosaur when you can just create one using CGI for a fraction of the cost?? Money is what makes the human world function and anything that is going to reduce the cost of making a movies is going to be embraced by Hollywood.

I am not saying that all CGI effects take you out of the situation, unfortunately it is generally very easy to tell a bad computer generated effect. Probably one of the biggest culprits who uses over the top CGI is Steven Sommers, and people universally agree on how terrible the Scorpion King from The Mummy Returns looks. Yes the top half looks like Dwayne “The Rock” Johnson but the rest of it just looks shockingly bad, and bad CGI will tear you from a film and you may never get invested in it again.

The less is more is generally the best method when using CGI and in the first Jurassic Park film this is exactly what happened. A lot of the dinosaurs were puppets or practical effects with a few sequences using computer generated animals being included. The link between the two were seamless so it was harder for your brain to figure out when you were seeing a “real” dinosaur and when you were seeing a creation of computer imagery.

Naturally though technology is developing all the time and so the trend has become to rely more and more on CGI which means that techniques that filmmakers relied on for years have been supplanted in favour of using computers.

Personally I think the biggest problem with computer generated as appose to practical effects is the way light moves and more importantly the eyes of a CGI creation. When you look into the eyes of a puppet you can see into the effect and know if there is a soul (someone operating it) behind its movements or if it is a computer’s interpretation of something alive. The T-Rex peering through the window of the Jeep in Jurassic Park looks way more lifelike than the Indominus Rex looking through the giro sphere  in Jurassic World. The way light moves over a puppet is also much more natural than how a computer would imagine light moves. Light doesn’t necessarily fall in the way you would expect and if something as simple as the way light travels over a surface isn’t right then you will notice thus taking you out of the moment.

Films like Avatar that are 90% CGI do demonstrate how far CGI technology has developed but where that film fell down was when the inhabitants of Pandora were shown side by side with the humans. They didn’t fit together. CGI battles between human forces and the inhabitants of the planet were very impressive but the moment you saw a huge blue feline alien standing beside a human the illusion was shattered. You can’t put the two together and fool me. Watching a complete CGI creation is fine when it is not sharing the screen with something real because when they are on their own you don’t see the joins between the real and the fake. Or better yet putting a CGI creation in the background will work because your attention is going to be focussed on the foreground rather than the back ground. 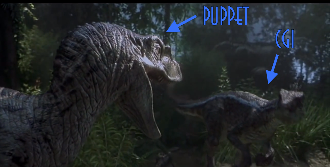 A puppet in the foreground and CGI in the background, your focus is drawn towards the raptor at the front rather than the one at the back. CGI can work but like I have said before it needs to be used sparingly because if it isn’t you get abominations like the Scorpion King or the mess that was Air Force One crashing in Air Force One (spoiler)

I do miss the days of practical effects and whilst I understand that using Computer Generated Imagery is the wave of the future I don’t really like it. Hollywood can continue trying to fool me and some of those effects are going to work but as far as I am concerned there should be space in Hollywood for both of these techniques to work together side by side.