Based upon the 2012 game of the same name Dragon’s Dogma is a 2020 anime in which we follow hero Ethan and his Pawn Hannah, as he journeys across the land to kill the dragon that stole his heart, and avenge the woman he loved. Along the way he must battle the embodiment of the seven deadly sins... 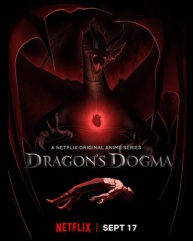 I’m an anime fan as you know, and whilst I have gotten into certain shows like Tokyo Ghoul, and Knights of Sidonia, some have left me bored and uninterested. The thing is when I find an amine I like, I want there to be multiple series so I can get my fix. Some shows that I have liked have been shorter than I would have liked so as I am getting into the story, characters and so on, they abruptly end. Devilman Crybaby would be such an example. I abandoned Vampire Knights or whatever it was called because it was boring, and I am contemplating forgetting about Blood C for the same reason. Dragon’s Dogma caught my eye and I decided to check it out. Now whilst I was aware of some of the story from the game I was basically new to the world of Dragon’s Dogma.

The story opens with Ethan and his pregnant wife living in a small village, with a neighbourhood boy, who lost his parents having dinner with the pair. Whilst Ethan and the boy are off hunting, the village is attacked by a monstrous dragon; the creature lays waste to the settlement killing everyone in its path. Ethan and the boy race back, but the boy is killed, and whilst Ethan tries to engage the dragon he is swiftly defeated. The dragon burns his wife alive, and cleavers Ethan’s heart from his chest, and devours it. The monster invites Ethan to come and find him if he wants to get his heart back and avenge the death of his wife.

Ethan awakens to find a young woman called a pawn who is sworn to serve the Arisen, which is what Ethan has now become. Ethan eventually names her Hannah, and he makes it his missions to track down the dragon and kill it to avenge his wife.

The road to the dragon’s lair is long and along the way Ethan confronts numerous men and monsters, all of whom challenge his dwindling humanity, as his quest to find the dragon begins to consume him...

Each episode is titled after one of the seven deadly sins, which (in case you don’t know) are: Wrath, Gluttony, Envy, Sloth, Greed, Lust and Pride. If you know what these words mean then you have a pretty good idea what each of the episodes is going to be about. Whilst I don’t know if the game is broken up into separate chapters because each of the episodes has a villain which embodies the sin.

In the Gluttony episode, a town of poor people are being ruled by a mayor who is fat and steals the food of the people, under the guise of protecting them from a monstrous Cyclops, a Cyclops that he allows to feed on the villagers to keep them afraid. Ethan foils the cushy life the mayor has, who winds up being betrayed by his friends, and is then lynched by the townspeople who descend into chaos as they ransack his house, and fight to reclaim what was once theirs. The Cyclops feels like it would have been a video game boss character but like I said I have not played the game I don’t know.

The episodes themselves are only half an hour long and so you never really get to know any of the characters before Ethan and Hannah continue on their quest.

The Sloth episode carries a “drugs are bad” message which is not exactly being woven into the narrative subtly. People are smoking moss which gets them high, resulting in them naturally having casual sex, lounging around, and basically being too baked to do anything constructive. A Hydra, disturbed by Ethan, does manage to devour the only sober woman in the settlement, and her stoner boyfriend/husband? is able to help in the battle against the monster. He is even able to cut her from the beast’s gut, saving her at the cost of her sight...yeah, she gets eaten by a Hydra, but does not get chomped, nor does she suffocate, somehow though she does lose her sight, because sure, why not.

A succubus is the main feature of the Lust episode and seduces young, strong travellers who wind up as dead husks when they have sex with her. The people of the village she hunts in only know that these men are going to bed that night, and being found the next morning, dead. None of the locals have tried to figure out what is happening though. Hannah is warned about what is happening, whilst the succubus is upstairs trying to get Ethan to have sex with her, but he realises the deception and strangles it to death. The demon creature being powerless to prevent him from killing her, and makes very little effort to fight back against him.

I am aware that I am dropping in lots of spoilers but unlike a lot of the other animes I have been watching recently when villains keep coming back, in Dragon’s Dogma they appear and are promptly killed. Ethan goes from being a normal man, to suddenly basically being unkillable. The dragon took his heart but as an Arisen he is able to shrug off wounds that would have broken his bones, or ruptured his internal organs, presumably meaning he is immortal of some sort but no time is given to explaining exactly what an Arisen is. The people of this world just seem to know what they are and accept it. Things is I don’t know what an Arisen is and the anime has absolutely no intention of telling me.

Prior to being de-hearted Ethan is something of a loner, who choose to hunt in the woods rather than fish with the other men of the town. He is built like a brick-shithouse for no reason that the anime bothers to explain. Generally anime characters have some kind of supernatural or superhuman abilities which mean they can have varying body types. Ethan starts as a brick shithouse and is the same brick shithouse by the time we get to the dragon’s lair. As I said above he has some mystical strengths now, but I was distracted by the weird way his arms are designed. They are covered in lines, which seems to be demonstrating his muscles but there seem to be too many lines for the amount of muscles which should be in a human arm. It was bizarre and very distracting.

Hannah is a jailbait girl who follows Ethan around and again no explanation for what a pawn is, where they came from, or what they actually are is given. Hannah cannot die, so why is she and those like her not the ones out hunting dragons and other monsters instead of wandering around following the Arisen about? Plus with the twist-type ending it makes you wonder why Pawns are not prepared to kill the Arisen before they are able to fulfil the reason for their existence before they can continue the cycle over again. I left that deliberately vague because I didn’t see the ending coming so don’t want to spoil it if you are planning on checking the series out.

I did stick with the series because I did want to see what happened but if it had been much longer than the seven episodes it was made of, then I might have given up on it. Ethan gets angrier as the episodes go on, but his transformation is too fast to be interesting, and Hannah is completely bland.

There are moments in which the series is capable of picking up some momentum but these moments are always fleeting, and generally happen in the last couple of minutes of the episode, or in the few second teaser for the next episode.

Now that I have written all this down I wonder if I even liked Dragon’s Dogma, yes I finished watching it, but then I blitzed it in a single evening so perhaps it was more like watching a film than a series. Truthfully I think that the series had potential, but it was just that, potential, which ultimately it didn’t seem to know what to do with it. Several episodes based around each of the corruption of the seven sins could have been interesting and kick-ass. Tokyo Ghoul knew when to be action packed, and when to be slower. Knights of Sidonia, Death Note, and numerous others I have watched also knew this. Dragon’s Dogma seems so delighted to be an anime that it can’t wait to go through Ethan’s entire story arc forgetting to develop anything, or anyone of its characters.

I don’t think that the show is bad, I did stick with it after all, but now that I have finished it and written down my thoughts I doubt I’ll even give it another thought. I am awaiting another series of Castlevania, but if there is another series of Dragon’s Dogma I might give it a watch if I literally have nothing else to do.

Leaving my Thumb Horizontal seems too much praise for this disjointed mixture of half-baked stories, undeveloped characters, and an interesting world that is forced to sit behind the dullards that we are forced to watch. A Thumbs Down is the only rating that seems fitting. 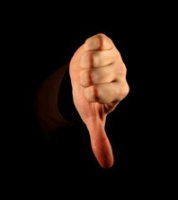 4/10 – A lot of good ideas that were not given the room to properly grow. Maybe the game explains this better but Dragon’s Dogma the anime was a chance for interest to be thrown back onto its source material. I have no interest in playing the game, nor do I want to spend more time in this world which is a shame because it could have been interesting.