Back in 2001 with a bit of time on my hands I started writing a series of stories about vampires, now I know how clichéd that sounds nowadays but at the time there was very little literature about modern vampires.

I have mentioned before that I love a good villain and what I had hoped I had written was a really good villain, one that took elements from some of my favourite characters but still created something new. I kept the focus of this story on the villain and was attempting to get the audience to like and enjoy the tongue-in-cheek character whilst rooting for him - in exactly the same way that I would root for Dexter Morgan in Dexter when that was first aired.

Unfortunately then Twilight hit the shelves and immediately the market was saturated by vampire stories and destroyed any chance authors like me had of getting our own work published. Mention the word: Vampire and immediately people think of Edward Cullen and the shockingly bad Twilight books and films.

Let me show you something... 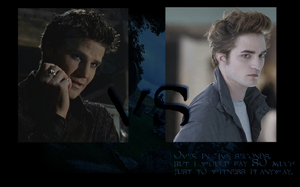 Above is a picture of David Boreanaz playing Angelus and Robert Pattterson playing Edward Cullen, just look at the picture and answer a very simple question: Which one looks the most threatening?? Is it the dark and angelic figure on the left or the pasty white quiff on the right - obviously the answer to that question is rhetorical.

To find images of Angelus I simply typed into Google Images "Angelus" and hundreds of images appeared with the majority of them showing him in his vampire-form, but when trying to do a search of Edward Cullen as a vampire all I got were images of him looking grumpy.

In Buffy the Vampire Slayer Joss Whedon gave the world something unique, the vampire with a soul: Angel. In the Buffyverse there was no such thing as a ‘good’ vampire and the forbidden love between him and a school girl (sound familiar) became the focus for the first 3 seasons. Sadly it seems that characters like Angel have become increasingly common, indeed it seems that teenage girls adore the idea of loving gorgeous and brooding vampires which explains the popularity of Twilight. This is despite the fact that the love story between Edward and Bella is simply a rehash of Buffy and Angel. Perhaps the best way to describe Twilight is Buffy and Angel for the new teenage generation, except that unlike Angel, Edward doesn’t feel the need to kick some ass to protect the woman he apparently loves.

You want a defining moment that separates Buffy and Angel from Edward and Bella??

There is an episode of Buffy when she absorbs an aspect of a demon and becomes telepathic, but she cannot control what thoughts she hears, over time she starts to go insane and the only way to cure her is to get the heart of the demon, Giles asks who is going to get the heart. The next scene shows a demon running for its life as Angel pursues it, his face twisted by the demon within him, and we see a brief scuffle after which the demon runs off again once again with Angel in pursuit. What did we get in Twilight?? A bit of pushing and shoving, that's it. Angel ripped out the heart of a demon to save the woman he loves whereas Edward doesn't allow his girlfriend to turn because she is only interesting to him as long as she is human.

Just look at the image above, now try telling me that Twilight isn't just a rip off of Buffy, I just find it infuriating that someone as, well, toothless as Edward Cullen has now become the poster boy for what a vampire looks like. Unfortunately the brooding immortal is something that we have to thank Buffy spin-off Angel for, now as a character Angel outgrew Buffy and got his own show that was more popular than Buffy. Of course that success was also a green light for hack writers to cash in on the success of someone else's work and create their own versions of existing characters.

On the subject of Twilight I think this images says it just right...and I thank whoever it was who came up with this. 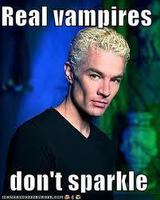 Now if only vampires had to take the hit from tripe like Twilight but no, they have also had to take a beating from the sex-sells attitude that have once again changed the immortal undead into sex-mad creatures of the night only interested in banging as many men and women as possible.

What do we think of when we consider a modern vampire??

In recent years vampires have gone from being the vicious, cold blooded killers seen in films like Blade and Vampires to brooding immortals haunted by impossible love or sex mad men and women who bounce from bed to bed drinking more spunk than blood

Anne Rice’s Vampire Chronicles gave audiences immortals that were haunted by their lingering humanity and were seen as romantic bisexual immortal who roamed Europe seducing those who crossed their paths.

Since then vampires have been losing their fear factor as they have slowly become synonymous with sex. No longer are people afraid of vampires, instead, if confronted by a vampire the best thing a person can do is have sex with them which will probably satisfy the immortal in question. There is a scene in the 2006 film Bloodrayne in which Rayne, has sex with Sebastian whilst in the grip of bloodlust. This is despite the fact that the two have had no chemistry, sexual or otherwise throughout the whole film, and don’t have any afterwards. The lesson here seems to be that sex or blood, one or the other will keep a vampire’s thirst at bay because after have sex Rayne’s bloodlust is satisfied. This scene also serves to show that when it comes to vampires and humans interacting directors cannot let them keep their clothes on.

No one is naive enough to assume that if someone was immortal and there was no danger of sexually transmitted infections or diseases that they would not put it about a bit.

What is becoming increasingly irritating is the fact that sex scenes between vampires and humans are essentially pointless. Season 1 of True Blood is basically just soft-core porn; the humans and vampires shed their clothes for no reason and gyrate against one another with little to no explanation about why. What is puzzling is why the makers of True Blood feel that the audience needs to see each sex scene, because essentially one sex scene is pretty much the same as another: pretty people pretending to have sex. So unless something necessary to the plot happens during the scene then why do they need to show the audience so much sex? Why can’t the sex just be implied? It seems the answer both questions are that the best way to attract an audience is to show beautiful naked women for the men, and attractive naked men for the ladies.

Audiences that object to the endless and pointless sex scenes in shows like True Blood are not prudes that either never have sex themselves or think that couples should only ever engage in sex after marriage. Instead they are people who tuned in to True Blood because they were hoping to see a vampire show which added some new dynamic to the genre, and instead all they ended up watching was sex, sex and more sex. What I found particularly difficult to swallow (no pun intended) about True Blood was the fact that I really enjoyed the vampire-lore stuff, that was really interesting and creative but so much time is spent focussing on non-entities that the good stuff is completley lost. 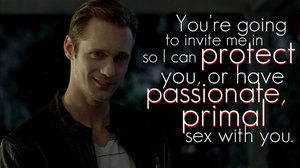 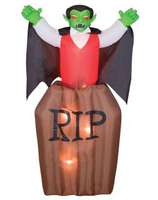 Vampires need to be given back their fangs and allowed to rip people to shreds again before characters like Angelus (Buffy), Decon Frost (Blade) and even Lestat (Interview with the Vampire) become nothing more than distant memories.

I hate this modern trend of making EVERYTHING about sex, it is ruining vampires, it is creeping into my beloved Star Trek and it needs to just stop. If the makers of these shows are so hard up for sex that they have to thrust it down the rest of our throats then maybe we should all send them money so they can get a hooker, get laid and chill the fuck out about sex for a while.