Well, it is that time of the year again when you humans exchange gifts and sometimes pretend the reason behind it is based on a religious holiday. Naturally corporations and shops latch onto the idea that people are going to be buying stuff and of course, those in Hollywood see this time of year as an excuse to release Christmas themed movies. The one I am going to be talking about today is Elf, which was released in 2003 and stars Will Farrell. 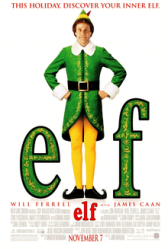 So t'is the season of goodwill to all and since September you humans have been swamped with shops and businesses covered in decorations, the radio blasts out nothing but Christmas songs and it is the time to buy presents and eat to excess. Plus the television plays one Christmas film, or Christmas special after another in the hopes of ringing a bit of holiday cheer from an audience that grew sick of the holiday season somewhere in mid-October when they were hearing "rockin' around the Christmas tree" for the billionth time.

Abbie likes this time of year, perhaps because Christmas Day marked the day of her creation, and loves all things Christmas. She has seen this film before and insisted that it was a Christmas classic and I needed to sit down with her to watch it...so that is what I did

So the film begins on Christmas Eve as Santa is delivering presents to an orphanage when one of the babies crawls into his sack. Not noticing about his little stowaway Santa continues his deliveries and arrives back at the North Pole only to then discover about his passenger. Knowing that the baby is an orphan Santa decides to give the child to an Elf that has always wanted a child but has never had one.

Over the years the child grows but naturally within a few years he already dwarfs the much smaller elves.

Some thirty years later, try as he might Buddy (Farrell) just cannot seem to fit in with the other elves. He is only capable of making 80-odd toys a day instead of the 1000 the others can. He overhears some of the other elves discussing him as being different and he decides to ask his Papa Elf (Bob Newhart) why he is not like the others. Papa Elf tells him the truth about his origins and that he is actually a human. He was orphaned as a baby however; his father was unaware that his mother had a baby as she never told him.

His human mother has since passed away but his Dad is still alive. Determined to track his real father down, Buddy leaves the North Pole behind to journey to New York City and find his father so he can find where he belongs...

Okay, let me get this out of the way first, as far as I'm concerned Will Farrell does the one character who is usually the bubbly, down on his luck, child-like, lovable guy with a heart of gold who just doesn't seem to fully understand the world around him. He doesn't understand why his actions are often met by hostility from others nor does he think about the consequences of his actions...sometimes this formula can work. Ron Burgundy from the Anchor Man films suits Farrell down to the ground, sadly, more often than not I don't see the character I see Will Farrell, and this film was no acceptation. This film is basically an hour and a half of Will Farrell overacting, shouting, singing, and acting like an overgrown child, and I found it very, very irritating.

Let's look at the premise, a human is raised by elves, and goes looking for his father. Okay fine, it’s a Christmas movie so I can go with that.

He sets off from the North Pole and moments later arrives in New York...it is over 4,000 miles from New York to the North Pole. Someone doing that journey in a car would take 3 days, 11 hours, so someone walking it would take a couple of weeks or more. Buddy is only wearing his elf outfit and has no thermal protection from the elements, so I think he'd have made it a couple of miles from Santa's workshop before he'd have frozen to death.

If we ignore that fact for a moment, there is really nothing to like about Buddy, he is an overgrown child. The other elves are capable of acting like adults, have rules, order, discipline and so on but none of that seems to have rubbed off on Buddy. Plus despite having no knowledge of the outside world, Papa Elf is quite happy to send him on his way, with no means or looking after himself or any survival skills.

James Caan is not exactly an actor I'd consider to be cute and cuddly; he doesn't scream the kind of person who'd sign up to be in a light hearted family film. More often than not he looked a bit bewildered as though he can't really believe that he signed up to be the straight man to Farrell's increasingly irritating Buddy.

Everyone just seems to be resigned to the fact that Farrell is going to be hogging the camera so realise that there is very little point in doing anything interesting as they are just background for Farrell’s antics. A blonde Zooey Deschanel stars as Buddy’s human love interest but she is just as bland as everyone else, she barely smiles, and after virtually no dialogue she agrees to go out on a date with Buddy. Now obviously she doesn’t find him annoying, she finds his behaviour charming, and I can honestly not understand why.

The only highlight of the film for me was Peter Dinklage as a tough as nails children’s book author named Miles Finch. He was genuinely funny and made me laugh during the five minutes he was on screen, Farrell tried hard to steal his scene but Finch did what I’d been wanting someone to do the entire film...he kicked Buddy’s ass.

I think maybe the reason that I have been picking so many holes in the film is because everyone seems to consider it one of the best Christmas films ever made, and it is Will Farrell’s best loved role. However, it is now 2018 and this film was made in 2003, I have seen Farrell do this kind of role over, and over, and over again so I am sick of it. If Abbie hadn’t been singing its praises so highly then I might have been more forgiving but honestly I cannot see the appeal of Elf.

I assume I am going to be considered to be a Scrooge for giving Elf a Thumbs Down, I did not enjoy it. Perhaps over time I might learn to appreciate it for what it is, but as I sit writing this I cannot say that I'd recommend it. 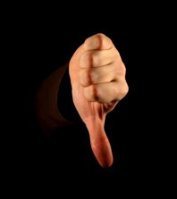 3/10 – If you like seeing Will Farrell hogging the camera and generally acting like an overgrown child then watch Elf. If you want to watch a true Christmas Classic then check out the truly awesome Arthur Christmas.