There are certain characters that probably come to mind if I asked you to describe who is Hollywood’s Hardest Character, you’d most likely think of the T-800 from Terminator, Dutch from Predator, John McClane from Die Hard, Rambo from Rambo and so on…most of these characters would be played by the likes of Arnold Schwarzenegger, Sylvester Stallone, Bruce Willis but realistically you’d basically be thinking of someone from the Expendables which featured the biggest array of action stars ever assembled and that number has only increased with the sequels.

However, here I am not talking about action stars, I am talking about characters that are not muscle bound powerhouses or experts in martial arts. Instead I want to discuss who in my opinion is Hollywood’s Hardest Character and I therefore give you Dennis Parker from Alien 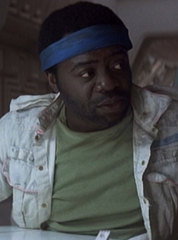 Now you might be asking yourself why Parker, not Ripley, is the one that I am acknowledging here…and I am naturally going to explain.

Consider if you will the scenario, an unknown alien creature has gotten aboard the Nostromo inside a fellow crew member and erupted from his chest killing him. This creature has then rapidly grown into a huge monster that starts hunting down and killing the remaining crew members one by one. The captain disappears and is presumed dead. Now with the surviving crew struggling to cope with the pressure and Flight Officer Ripley deciding that they are going to destroy the ship and take their chances in the shuttle. Parker and Lambert are sent to get oxygen cylinders for the life support system when they are confronted by the alien itself.

Lambert is standing frozen in terror and whilst Parker is armed with a flame thrower he doesn’t discharge the weapon for fear of hitting Lambert…he knows that the alien is there because it intends to kill them both but he cannot fire his weapons and risk killing his crew mate, can he??

…Now, ask yourself, and be honest, if you were in the same position what would you have done…would you have fired the weapon and hopefully burned the alien but hit Lambert where she stood??

Would you have bolted and saved your own skin??

If any of you said that you would have grabbed whatever happened to be handy and attempted to engage the creature in hand-to-hand combat then you are a liar, but that is precisely what Parker does. He grabs a hook and charges the alien. The creature notices him almost immediately and with a swipe from its tail knocks him to the floor before lifting him up and killing him with a headbite. It doesn’t matter how strong Parker is because the alien is stronger and within seconds manages to overpower the engineer as he tries in vain to defend Lambert.

Now, if you had set eyes on this nightmare creature, this monster, and you knew that it was going to kill you, and you either had the option to try and fry it along with a member of your crew, run away or try to fight it off I seriously doubt anyone would have tried to fight it.

For Parker, a normal human, not a bodybuilder or an expert in kung fu or whatever, to have the massive brass BALLS necessary to try and fight the alien whilst shouting at Lambert to run and save herself I think you can understand why I view him to be Hollywood’s Hardest Characters.

Dennis Parker was not a coward, he was not a captain acting out of duty, he was just a man, a man that was trying to protect his crew mate. Dallas went into the vent armed with a flame thrower, Parker had a weapon but chose not to use it because he wouldn’t risk hurting Lambert even though his own life was forfeit the moment he charged at the alien.