First released in 1988, Akira is a science-fiction anime, and is based on the mange of the same name. It is set in the world of 2019, in a futuristic dystopian Tokyo and focuses on two teenager bikers, Tetsuo and his leader Shotaro Kaneda. The film has developed something of a cult following and is considered by many critics to be one of the greatest animation and science fiction films of all time

Akira is a film that I first saw several years ago with a friend of my skin sack, and was left wondering, what the hell was that all about?? Gaz (my skin sack’s friend) said that he first saw the film around 15 years ago and still didn’t really know what was going on. Since then I have seen the film a number of times and I think I have finally determined exactly what is happening. But before I get too ahead of myself let me give you the gist of what is going on, you know before the film gets all weird…

In 1988 Tokyo was destroyed by a massive psychic singularity which initiated World War III, and the city has since been rebuilt as Neo-Tokyo. By 2019 gang violence has grown. One such gang is controlled by Shotaro Kaneda, and as they battle a rival gang, his friend Tetsuo crashes avoiding what appear to be an aged child. Tetsuo is hospitalised, and his friends are interrogated. The aged child is actually Takashi, a psychic who fled from a secret government instillation controlled by the Japan Self-Defense Force, he is one of three children held there that all have psychic abilities.

During his treatment doctors discover that Tetsuo has psychic abilities similar to Akira, the psychic that destroyed the original Tokyo in 1988. The Parliament warns that if Tetsuo’s powers are not kept in check he might lead to the destruction of Neo-Tokyo so it is advised to kill him, but this suggestion is rejected.

Tetsuo escapes the facility but is recaptured after suffering severe migraines and hallucinations, and is returned to the hospital. Kaneda, determined to rescue his friend, joins a terrorist group  to attack the facility and get him out. The other psychics including Takashi attack Tetsuo and attempt to kill him but his own powers start to manifest as he confronts them allowing him to defend himself.

His pain starts to get worse as his powers start growing and becoming stronger, fighting to control them, Tetsuo breaks free of the hospital and attempts to seek out Akira, the only one who’s powers were as strong as his are becoming.

Okay…so a psychic destroyed Tokyo in 1988 and lead to World War III. As a result the government is wary of anyone who starts to manifest powers especially if those powers are anything on par with those of Akira. Initially the audience is left in the dark regarding what is happening to Tetsuo, who has something of a rivalry with his friend and leader, Kaneda. It is unclear whether Tetsuo actually likes Kaneda because he seemed to take any opportunity to challenge his authority as leader. He even threatens to kill him on several occasions during a rampage through the city, and yet he calls out for Kaneda to help him when he starts to lose control of his powers later on.

The above description may sound pretty basic, boy starts to develop psychic power, and his power quickly begins to grow out of control. Not exactly difficult to follow. What really makes you go… 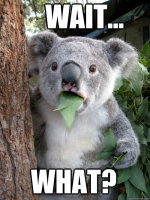 …is the film’s ending.

Tetsuo escapes the hospital for a second time and goes on a rampage through Neo-Tokyo, the army is scrambled to intercept him but he takes tanks apart with a thought killing those inside with equal ease. Some of the people celebrate his powers believing him to be some kind of messiah, like Akira was, but he kills them with the same casual indifference as he did the army. In one instance collapsing a bridge which had military and civilians alike slaughtering everyone in his path.

He finally settles in a stadium that is being built for the upcoming Olympic Games where the military attempt to kill him with a satellite weapon, the weapon slices off his arm but he creates a new one from debris around him. Eventually Kaneda arrives and attempts to talk to his friend but Tetsuo’s powers start to increase again, unable to control them he tries to find a cure, but he is unable to do so and mutates into a giant mass…

…this is where the film starts to lose me…

Tetsuo becomes kind of a giant baby, he accidently engulfs a woman he had feelings for named Kaori, and assimilates her into himself. He calls out to Kaneda to help him. The three psychic children reappear and join with Akira as they confront Tetsuo who starts to explode and engulf Tokyo just as Akira did before him. Some-thing happens, Kaneda is transported to safety as the psychics take Tetsuo away where he can’t harm anyone else, then the film ends…

So Tetsuo becoming massively powerful, kills a bunch of people as he seeks out Akira, who, it turns out, exists only as body parts. Whoever Akira is, he has been dead a long time, and yet somehow is aware. I am pretty sure that he is in contact with the three old-looking children that are all linked to one another but also to Tetsuo. They seem to recognise how powerful and dangerous that Tetsuo will become and attempt to stop him, but their efforts seem to only develop his powers as he defends himself.

Plus why Tetsuo turns into a immense baby is still a mystery to me, however, if I can share with you my theory about what happens in the film’s climax.

So, Tetsuo is losing control of his powers, he cannot keep them in check and is in pain as he struggles with the migraines. As they start to consume him, the three children somehow link with Akira’s mind and power, recognising that Tetsuo will cause the destruction of Neo-Tokyo they take him back to the beginning of the universe itself.

There is a scene in which they say that Tetsuo’s power signature is merging with Akira’s and as the film draws to an end the energy signature appears to be the same as the universe.

This is my theory about what is happening with the film, it fits what takes place and why Tetsuo’s powers share the same pattern as the universe itself. Plus the only place that he can safely explode without killing all life on earth is the beginning of the universe where no life exists. Tetsuo has absorbed raw materials as he expanded, and those materials are scattered as he explodes at some point in the far distant past.

You may have noticed that this film was not called a review, because I was more interested in talking about what happens at the end of the film, than simply reviewing it. The film itself is very interesting and the animation is very stylish. The setting, Neo-Tokyo, must have been the origin of all Neo-Type cities that have come since, high sky scrapers, fast vehicles, and governments that conduct experiments on those with special abilities.

If I had been reviewing the film I would have said that it takes some figuring out, and honestly my theory may be completely wrong. A while ago I shared this theory with Gaz and he agreed that what I described to him was certainly possible. I urge you to watch Akira because you might well figure out your own theories. If you are a fan of animation and especially anime then I would urge you to track down this film and watch it because honestly there is nothing else quite like it.