First released in 1897 The Invisible Man was a serialized science-fiction novella that was first published in Pearson’s Weekly and written by H.G Wells. It has since been adapted time and time again and features a man who was able to make himself transparent using a formula he developed. The character, Griffin, is not the same character seen in The League of Extraordinary Gentlemen who was a thief named Skinner that stole the formula from the original inventor but lacked the formula to change back.

Yet another book that I downloaded onto my kindle because I was curious about the original novel in which audiences were given an invisible man. The method by which he did it is explored later on in the book but before getting to that follow me as we dive straight in to The Invisible Man…

Opening in Iping, West Sussex, England, a mysterious man arrives at the local inn and requests a room. He is dressed oddly, his face is covered by bandages, he wears a long coat revealing no trace of his own skin. He pays for a room and tells the innkeepers that he wants to be left alone and undisturbed, his strange appearance causes much speculation by the townsfolk. The Landlady attempts to ask about why he dresses that way, but he rudely and aggressively refuses to tell her demanding to be left alone. The following day his luggage arrives but this only adds to the mystery as within the bags are dozens and dozens of bottles.

As time goes on robberies begin to happen in the town, and after the Landlady demands that the stranger pays his bill he angrily reveals that he is in fact invisible.

The town is shocked and he is forced to go on the run. Fear grips the surrounding area as the invisible man forces a tramp named Thomas Marvel into helping him by threatening to kill him if he doesn’t. The invisible man wants the three books containing his notes about how he became invisible returned so that he might find a way to change back. Unfortunately the tramp betrays him and goes to the police telling them all about the “invisible man” so he is forced to flee again.

He eventually comes across a doctor named Kemp that he used to know, it is here that we learn the invisible man’s name is Griffin and how he became invisible…

Now as you know during my time I have read numerous classics of literature and some fall into the great category like Strange Case of Dr Jekyll and Mr Hyde others into the pile of shit that I wish had never been forced into the world like…do I even need to say it??...yes you guessed right…Moby Dick.

I don’t think there is anyone that hasn’t considered what it would be like to be invisible and over the years we have seen both good invisible men like Nick Holloway in Memoirs of the Invisible Man and people who get drunk with the power of being unseen like Sebastian Cane in Hollow Man. Naturally the idea of someone becoming invisible came from this novel and so how does this book stand up??

Honestly the main character is so selfish, so inconsiderate and so unpleasant that it is incredibly hard to root for him. I don’t honestly know if we’re supposed to be rooting for him but nothing about his character makes you want to see him succeed. Previous incarnations that I’d seen, specifically Skinner in League of Extraordinary Gentlemen (who I thought was the original invisible man until I checked on the internet) gave us a gentleman thief that was a reluctant hero. Griffin is just an asshole. He cares about nothing but himself, getting what he wants, and ultimately wants to establish a reign of terror across England

How he became invisible is pretty creative and his struggle to return to normal is very interesting, but he seems oblivious about how to use his invisibility. At one point he is hiding in a department store but is somehow discovered, I mean for fuck sake, why doesn’t he just stand in a corner not moving?? He gets a cold later on so sneezes every once in a while which always seems to happen whenever the authorities are around. But why he immediately makes a loud exit whenever he sneezes is anyone’s guess because surely he could just go stand in another corner.

The other characters are pretty forgettable, plus everyone who learns that there is an invisible man on the loose want to hunt him down and capture him. Naturally because Griffin is such a dick we want him to be captured, either that or killed, and as the book nears its conclusion the plans of the invisible man really begin to fall apart.

The best idea from The Invisible Man is having an invisible man and honestly I have seen better ideas of what an invisible man could do, even in Hollow Man Sebastian’s transformation from good to evil was done slowly. In The Invisible Man Griffin starts off as an asshole, he is already selfish, and you have no connection to him at all. Rodney Skinner, the “gentleman thief” was far more likable than Griffin and was someone that you wanted to root for.

The title of the book also lets you know exactly what kind of character you are going to be reading about…an invisible man so I am not sure what H.G Wells was expecting when he gave us the big reveal scene in which Griffin removes his bandages to show his terrified Landlady and others that he is invisible…we…[the audience]…already know that he is invisible.

The one idea that works in the book is the notion that a person can become invisible which has been reinterpreted hundreds of times, thing is I prefer those adaptations. Yes, this is the original idea so I guess it could be argued that maybe H.G Wells was not sure if this book would be laughed out of the room so perhaps decided not to develop something more interesting.

Is The Invisible Man worth a read?? Honestly yes, it is the original idea, and whilst it is not one of the better classics it is worth being read once…just once…I didn’t hate the book nor did I love it so it gets my Meh rating as my Thumb remains Horizontal. 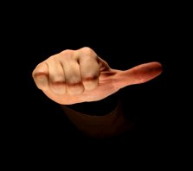 4/10 – The main character is an asshole, we spend a lot of time with the people of Iping speculating about why the stranger wears bandages on his face which is completely pointless because we know he is invisible…yes it is worth reading but don’t set your hopes especially high.