You know I had intended to review The Iron Giant this week as I truly love that film, but I was idly channel flicking when I came across the Rugrats Movie, which was released in 1998. Now I will admit that I did watch the TV show The Rugrats which was a cartoon about a bunch of babies that have various little adventures. The Iron Giant was still on my mind to review but after watching a few minutes of Rugrats Movie the horror I witnessed made me bury my head under the nearest blanket and made me ask the question: What the Fuck???

Now for those of you who don’t know a few years back I watched a lot of children’s cartoons, and one of them was Rugrats. Basically the premise was that Tommy Pickles is a relatively new born baby who still wears nappies without trousers, who is friends with a slightly older baby named Chucky, and twins Phil and Lil. The babies are constantly bullied and manipulated by Tommy’s cousin Angelica, a spoiled little brat that was always determined to get her own way.

The charm of the show was that the babies took everything literally and one of the episodes that I remember was when Tommy’s mother, Didi,  was going on a game show. She tells Tommy that she was looking for [her] “place in the sun” so Tommy and Co go off to try and find the sun to make his Mum happy again. During the episode they mistake a large studio light for the sun and when Didi wins the show she has a large spot light put on her so Tommy is happy that she has found the sun.

What I realised today when I was thinking back on the show was whether Stewie Griffin is really having the adventures that we see in Family Guy or if it is all in his head like the adventures for the babies in the Rugrats were. I think it is unlikely as Stewie met Bertrum for the first time inside Peter’s testicles and consequently knew him later when Bertrum was born, so yeah, Stewie does have all the technology for real in Family Guy. In Rugrats we were just watching babies, basically being babies, they were cute, funny and it was pretty hard not to see the cartoon for the innocent show it was.

Naturally it is not uncommon for TV shows to get movie adaptations, Doug had a movie, so did Wild Thornberrys, and even Family Guy had Stewie Griffin: The Untold Story a few years back. I knew that the Rugrats had a movie adaptation but I had moved on by then, lost interest in the show and hadn’t actually seen any part of the movie, until today…

I have never actually done a review based on a few minutes of a show or movie but honestly what I saw in the Rugrats Movie made my mouth drop open in shock and my eyes widen in absolute horror so I couldn’t bring myself to keep watching any longer.

So, picture if you will a scene in which Didi is about to give birth to a new baby, and the other children are taken to the hospital as apparently they couldn’t be left home with their Grandfather, but anyway. Now at this point I wasn’t really watching I was still flicking through the on-screen menu and so exactly how the children ended up wandering into the maternity ward/nursery is a mystery to me. Before I knew what was happening these horrifyingly animated new born babies were singing to Tommy and Co…take a look at what they look like… 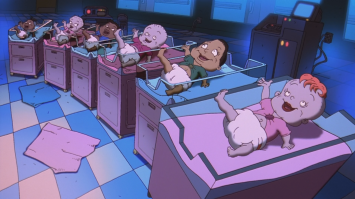 Jesus Christ…what the hell are those??

Are those abominations of Darwinism supposed to be cute?? Tommy and the others look pretty normal, they appeared to be more or less the same as their TV counterparts but the creatures that took centre stage in this scene were horrifying. To make matters worse the babies in the show talk in well, baby voices. The babies in this scene are all singing with adults voices which is not cute, God no, it is really, really, really creepy. If that wasn’t bad enough at the end of their “musical” number the babies all pee into the air (all the babies, even the girls), pee into the air above their heads where their urine somehow merges into a rainbow.

If that wasn't bad enough, at one point a baby girl looks at her belly button and remarks that her cord has fallen off, at which point a baby boy looks into his nappy and replies with something along the line of: "you're the lucky one"

Someone, somewhere, had to write that…a person who was paid actual money wrote “now the baby boy makes a comment about his dick, and then the babies pee into the air where their piss will form a rainbow above the heads of Tommy and Co”.

What a charming notion.

Dick jokes, and pee raining down on the heads of a group of babies. So if you were wondering why I have chosen to talk about this film even though I only watched it for a total of around ten minutes was because this scene was just so horrifying that I couldn’t bring myself to watch the rest.

I have watched horror films, as I have mentioned more than once Event Horizon is a splatter-fest that I thoroughly enjoyed, so films that are intending to be scary are fine with me. But the Rugrats Movie was supposed to be for children and I fail to see how children could be anything other than horrified. The animation was terrible, the TV show was far more colourful, and had a charm to it that made it hard to dislike. From what I saw there was nothing of that charm in the movie, there wasn’t anything that I could recommend this film on, the maternity babys pissing into a rainbow…how could the rest of it possibly be anything other than a shambles??

Perhaps I cannot give a proper opinion considering I only watched around ten minutes but each one of those minutes was like being slowly tortured, it is not often that I bury myself under a blanket when a movie intended for children comes on TV…in fact this was the first time that I have ever hidden under a blanket. So I guess that is a tip for you humans, if you want to give me a moment’s pause before I vaporise one of your major cities put this on a big screen and it’ll buy you a few minutes of life before I open fire.

I’m going to give Rugrats Movie a Thumb rating, even though I seriously doubt there is any point, still it gets a definitive Thumbs Down, actually a single Thumb Down is not enough, so I am giving this film my very rare TWO Thumbs Down. 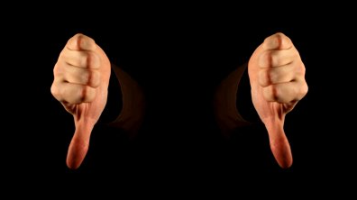