Serving as something of a spin-off of The Next Generation, Deep Space Nine shifts the formula of Star Trek by setting the entire series in one location. An abandoned Cardassian space station left behind after the liberation of Bajor by the Bajorian people who had been fighting the Cardassian Occupation for 50 years. The series stars Avery Brooks as Captain Sisko. It ran from 1993-1999 and the whole series is available on Netflix. 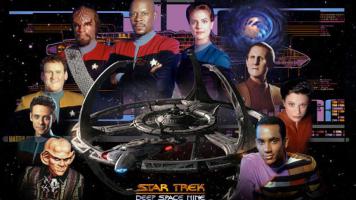 Set in what is known as The Next Generation-era Deep Space Nine (or DS9) is not about the finest crew ever assembled, nor do the characters immediately like each other and develop strong friendships. Sisko himself is still mourning the loss of his wife, who was killed on the USS Saratoga during the battle with the Borg Cube at Wolf 359, and is considering leaving Starfleet behind.

He is assigned the post of Commander of a formerly Cardassian controlled Station in orbit around the planet of Bajor in a relatively unimportant sector. For the last five decades the planet was occupied by the Cardassians, a brutal race that slaughtered countless men, women and children, plus are guilty of all manner of crimes including rape, kidnapping, torture and murder. The Bajorian Resistance was finally able to force them to leave the planet behind, however, before leaving the Cardassians stole as many artefacts as they could plus left the station as shell of its former self. The Bajorian Provisional Government requested the presence of the Federation to help them rebuild following the Occupation. One of the first people to be assigned to his crew is none other than Miles O'Brian (Colm Meanley) the former Transporter Chief on board the USS Enterprise-D (reprising his guest role from The Next Generation into a permanent cast member in Deep Space Nine)

Upon arriving Sisko meets his new First Officer Major Kira (Nana Visitor), a former resistance fighter and someone who doesn't think Bajor needs the Federation. Technically the station is Bajorian with the Federation commander. Amongst those that remain are a shape-shifter named Odo (Rene Auberjonois), and a Ferengi bartender named Quark (Armin Shimerman). In the wake of the destruction the Cardassians left in their wake most business owners on the station's Promenade are leaving. However, Sisko is able to coerce Quark into remaining in order to send a message that the dark past of the station has ended and people need to rebuild their shops and lives.

Other members of Sisko's staff arrive with Doctor Bashier (Alexander Siddig) and Jadzia Dax (Terry Farrell) as the Station's Chief Medical Officer and Science Officer respectively. Sisko is also encouraged to go to the surface and meet the planet's spiritual leader Kai Opaka. She tells him that he is the Emissary to the Prophets. Beings that the Bajorian people worship as Gods, and that it is Sisko's destiny to find the Celestial Temple. Returning to the station he and Dax investigate some anomalies in the region stumbling across the entrance to a wormhole (a tunnel through space) which connects the Alpha Quadrant to the Gamma Quadrant 70,000 light years away.

On the return journey Sisko meets the Prophets, beings that live outside of the normal flow of time, and is confirmed to be their Emissary. The station is moved from Bajor's orbit to the mouth of the wormhole, and the population of the Alpha Quadrant decide to send ships through to explore the rich new frontier of the Gamma Quadrant. However, not all of the species they encounter on the far side of the Galaxy are friendly...

My love of The Next Generation is well documented, and I was able to get into the show because essentially each episode is a self-contained story. Previous events are sometimes referenced but generally someone could tune in with no prior knowledge of the show and still enjoy it. I watched some of Voyager but at times Janeway's self-righteous and unwavering principals did grate on my nerves on occasion. Deep Space Nine I had watched on an off but never really got into it. As the show was available in its entirety on Netflix I decided to watch an episode a day until I had worked my way through the entire series.

Now it has to be said that the first couple of seasons are a very slow boil and start off in a similar veins to The Next Generation in that the episodes are self-enclosed stories, however, unlike The Next Generation or Voyager, in DS9, the crew have to live with the consequences of their actions. The DS9 crew don't have the luxury of simply warping somewhere else. As a result the series has numerous characters that reappear throughout the seasons. Some in a villainous capacity, others as allies, or some that transition from being one to the other and sometimes back again.

The biggest strength in DS9 are its characters. This isn't watching the best of the best serving onboard the Federation's Flagship, this is a mismatch of Bajorian military, Starfleet, civilians and various other races all working on a former ore processing centre. Sisko is initially reluctant to accept his role as the Emissary but over the course of the series embraces his role and begins to believe in the Prophets as much as the Bajorians do.

Easily one of my favourite characters is a Cardassian tailor named Garak (played by Andrew J. Robinson) who appears in the second episode of the first season. He is a charismatic, charming and intelligent man, who may or may not be a former operative of Cardassia's Secret Police the Obsidian Order. Any episode in which he features is an absolute joy because you never know exactly what he is going to do or what he reasons for doing what he’s doing actually are. He has a dark past but it is never really revealed so his history is left as something of a mystery throughout the show.

Quark is another great character. As a Ferengi he is concerned with making Profit by any means necessary. As a result he constantly butt heads with Odo (who is in charge of Security on the Promenade) who would like nothing more than to see him in prison. The two slowly becoming "frenemies" as there are times when they are almost friends but others when they clearly hate one another. Quark's nephew Nog (Aron Eisenberg) has a truly great overall story arc as he comes to realise that he "doesn't have the lobes" for business so ultimately seeks Sisko's help so he can go to the Academy becoming the first Ferengi in Starfleet.

Louise Fletcher's reoccurring role as Vedek and later Kai Winn is also great, not because the character is likable, but because she is so utterly ruthless, corrupt and driven by her desire for power. She uses the Prophets as a means to further her own ambitions, and cannot stand being forced to share Bajor's spirituality with Sisko who is the Emissary.

The list could go on and on...Marc Alaimo as Gul Dukat, the former Overseer of the Cardassian Occupation of Bajor. Who sees himself as a kind and riotous man that the Bajorians were lucky to have watching over them. Naturally he is completely deluded and seeks to regain his former position in the Cardassian Union which was damaged when his people abandoned Bajor.

There are naturally downsides to the show and like I said there are early seasons and episodes that are pretty slow, or just miss their mark. Also even within the show's continuity some things don't make sense. As a Vedek (kind of like a Priest or Vicar) Winn is established as being part of a small and rather unimportant Order, as a  result she visits the station on a couple of occasions and causes an uproar basically for no reason other than to get noticed or discredit rivals. She is also behind assassination attempts or even coups, all engineered to further her own influence. Later on she is running for Kai along with a more popular named Bareil but for various reasons he has to withdraw so Winn becomes Kai. I am not exactly sure how she managed to win the election when it has already been established that she has very little power or influence when Bareil wasn’t the only Vedek looking for the position.

After the introduction of the Dominion the series really picks up steam and sees the introduction of a character from The Next Generation. Instead of exploring the Gamma Quadrant in Runabouts (larger shuttles that get destroyed pretty easily and in most episodes it seems) Sisko brings the Defiant, a new class of warship designed specifically for combat against the Borg that he helped designed after Wolf 359, to the station.

Later seasons have entire seasonal story arcs that are very entertaining and fun to watch. The show knows when to be action packed and when to be slower. The core characters all get screen time and as time goes on they do start to form bonds, and friendships with one another that happen organically over time.

All in all, Deep Space Nine is a great show that deserves its Thumbs Up. True it doesn't hold the same place in my hearts as The Next Generation but if you have Netflix then I strongly advise you to check it out. Just be aware though it does take a bit of time to get going, however, once it does you'll see it was well worth sticking with it. 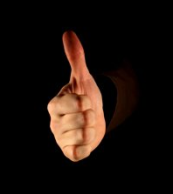 9/10 - The characters are what make this show so good as the people here aren't all Starfleet but must find a way to live and work together. Even if you aren't necessarily a Star Trek fan it is still worth checking this series out because it has strong stories about politics, life, love, war, genocides, redemption and just about everything else you can think of. It is one example of sci-fi at its best with its strong cast and a scenario in which the characters must face the consequences of past acts.