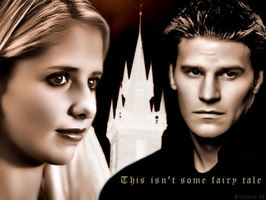 One evening a few years ago I was lazily hitting the channel button trying to decide whether I should just turn it off, when I flicked onto Sky One and a show called Buffy the Vampire Slayer was on. With no better options (other than switching the screen  off obviously) I decided to watch it, it had an attractive hereon who could kick some ass, and the vampires in it were cool, fun and the idea that they might sparkle in the sunlight was so ludicrous that it would have been laughed out of the room if one of the writers had suggested it. The episode in question happened to be a two parter and ended with Angel on his knees after making love to Buffy screaming in agony as his soul is ripped from him restoring him back to being the worst of the worst: Angelus. I was intrigued enough to watch the following episode and so began a love/hate relationship with the pint-sized vampire slayer…on the one hand the ideas are creative, the monsters are varied, and the supporting characters are unique with interesting back stories…on the other hand you have to endure Buffy’s constant whining, arrogance, and trying to get into a normal relationship despite continuously sabotaging them.

The series had seven seasons and spawned the much better spin-off Angel, and whilst the show suffered and steadily declined after Angel’s departure it was popular enough to boast computer games, comics, and books set in its universe

The character of Buffy Summers was inspired by those horror films in which the short blonde girl gets killed in the first few minutes, and whilst a film was released it did not do especially well.

The TV series gave this idea its niche.

Like the novels of the Star Trek universe Buffy books can be either really great, imaginative and loads of other positive words, or dull, tedious, pointless and a complete thesaurus of unpleasant things I could list.

In this section I will take a look at some of these novels, some set in Sunnydale and focus on Buffy and her friends (some when Angel was still there and some not) and others that focus on Angel’s adventures as he fights the good fight in Los Angeles.