Oscar is nobody fish who works in a whale wash and dreams of ascending to the top of the reef. He is given his chance when he takes credit for killing a shark, and becomes known as the “Sharkslayer” and protector of a city full of fish. The problem is that the shark Oscar ‘killed’ was the son of Shark Mob Boss Don Lino and Lino is out for revenge.

In the early 2000s DreamWorks was trailing on the heels of Pixar, whatever they seemed to do, Pixar had either done it first and done it better or was also working on something similar that outshone DreamWorks’ efforts. This happened with A Bug’s Life and Antz. Since then DreamWorks has managed to find its place in the animation world with movies like How to Train Your Dragon or the Kung Fu Panda films.

As this film came out in 2004, the year after effortlessly charming Finding Nemo it had some pretty big shoes to fill. Fans had experienced the beautifully animated undersea world and memorable characters of Nemo so would DreamWorks be able to follow in the wake left by Nemo and create something equally great, or would they just sink without a trace??

Let’s take the plunge and find out…

Oscar (voiced by Will Smith) is a fish that fantasises about being rich and famous whilst he does his job as tongue scrubber at a whale wash. He also owes five thousand clams to his boss Sykes (Martin Scorsese) and if he doesn’t pay it back by the next day then he will be in serious trouble. His best friend Angie (Renée Zellweger) loans him the five thousand and instead of giving the money to Sykes he overhears a tip and bets it on a seahorse race. The horse trips so the money is lost and Sykes decides that he has had enough and instructs his henchmen to kill Oscar.

Later whilst out in the middle of nowhere a pair of great white sharks Frankie (Michael Imperioli) and his vegetarian brother Lenny (Jack Black) come across Oscar and two jellyfish henchmen Ernie and Bernie (Doug E. Doug and Ziggy Marley). The jellyfish flee and Frankie encourages his brother to kill Oscar to prove that he is a killer to their father Don Lino (Robert De Niro). Lenny doesn’t eat him and his brother Frankie decides to do it for him and is killed by a falling anchor.

Ernie and Bernie don’t see the anchor fall and when they return they see Oscar standing over the body of a shark. Oscar sees this as his opportunity for fame and clams to have killed the shark. He is aided by Lenny who wants a new life in the reef away from the expectations of his father and helps Oscar convince the reef that he is a real shark slayer.

Before I go on let me show you something… 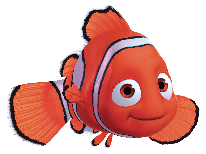 This is Nemo from Finding Nemo, he’s cute isn’t he??

Charming little smile and you can easily find yourself rooting for him. 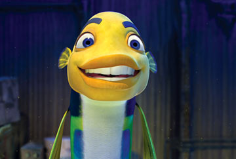 Seriously what…the…fuck is that supposed to be??

Have they tried to map Will Smith’s face onto a fish?? Why the hell would they do that, I mean do you find yourself rooting for this abomination of Darwinism?? All of the fish look like this in Shark Tale, fish bodies with more human looking faces and each one is just freaky to look at so that is a pretty big stumbling block that might make you switch the film off immediately.

As for the rest of the film, Shark Tale creates an undersea world that is closely modelled on a human city like New York. The reef the fish live in is essentially a human city, with various shops and businesses (I have to admit the deserted sushi bar was quite funny). The characters themselves could easily have been played by human counterparts. The sharks are the mafia and live in a ship wreck. They also terrorize the reef meaning that the fish have to hide whenever they are in the surrounding area.

The environment is very colourful but Shark Tale suffers from the fact that it is telling a human story but has decided to use fish instead of people. Younger audiences won’t understand the concept of someone owing money to loan sharks and probably will not get the joke. The voice cast are all A-List with Robert De Niro playing a shark character that is an obvious parody of the character Don Vito Corleone he played in The Godfather. However, the purpose of having De Niro playing a shark based on his character in The Godfather is a little curious considering that the target audience will be too young to get the reference.

Much of the advertising for Shark Tale tied it together with Shrek (“from the studio that brought you Shrek” is written on the DVD box). Shrek was a success but it does seem Dreamworks thought that they’d be able to reproduce the success of a film about an ogre with a film about fish. It seems pretty obvious that DreamWorks was trying to cash in on the success of Finding Nemo and Shrek but it just falls completely flat. Oh, we have a shark that is a vegetarian…ha ha ha…yes it is funny because sharks aren’t vegetarians as far as we know…the thing is, it is such an obvious joke that it just isn’t funny. Also the shrimp trying to convince Don Lino not to eat him is so tragically un-amusing that you’ll find yourself rolling your eyes and sighing with irritation.

Shark Tale does have a few laughs and the voice cast will be easily recognised. Unfortunately it seemed that Dreamworks were too invested in the famous voices instead of writing a decent story. Overall Shark Tale lacks the plausibility, the charm, the characters and basically everything that made Finding Nemo so charming because underwater reefs do not look like human cities with big screen televisions and billboards.

It has its slightly amusing moments (like the brief shot of the sushi bar) but it is a pretty lazy effort, you can’t just smack Will Smith’s face onto a fish and expect gold, however, that seems to be exactly what Shark Tale was trying to do. I hate laziness and that is what this film is, it is just lazy, it is DreamWorks saying to themselves “Hey, Pixar did a fish movie and it was awesome, so let’s do one too, get Will Smith, and it’ll be a success”…No DreamWorks, you need to put in effort and it is clear there is very little effort that has gone into making a decent film set in an undersea world. Now whilst the film is not that bad it could have been so much better and as a result it is getting a resounding Thumbs Down.

4/10 – Like I said this movie isn’t the worst film I have ever seen but it is definitely below average and whilst it boats an impressive A-List voice cast it lacks just about everything that Finding Nemo so much fun to watch.