Made in 2011 and co-written by Seth Rogen The Green Hornet is a mixture of action and comedy as a slacker tries to live up to the ideals set up by his father. The film is based upon the character of the same name that first appeared in a radio show and has subsequently appeared in TV shows, comics and various other forms of media.

In 2008 the Marvel Cinematic Universe was born with Iron Man and whilst it has had its ups and downs, generally that particular Universe has been going from strength to strength. It seems that whilst Marvel have got their heads in the game, DC are dragging their heels considerably, and in 2011 they clearly believed that Marvel’s combined Universe would die off but decided that if Marvel could make money with their comic book superheroes then there was no reason why DC shouldn’t throw a comic book character into the big screen…so we have The Green Hornet

Personally I was not familiar with the characters, but as I have read more background on them, it seem that the Green Hornet is a new type of criminal who is actually a good guy that targets other criminals hoping to run them out of town.

As a concept, I think you’ll agree it could work on the big screen…before we consider that…let me quickly run through the plotline…

Britt Reid (Rogen) is a 28-year old slacker and son of widower James Reid (Tom Wilkinson) who is the publisher of a Los Angeles paper called The Daily Sentinel. Britt is an irresponsible playboy who is shocked by the sudden death of his father, the victim of an allergic reaction to a bee sting.

Britt fires everyone who worked for his father with the exception of the maid and the man who makes him his coffee in the morning Kato (Chou). After an evening of drinking Britt and Kato decide that they hated Britt’s father then go and vandalise the statue erected in his honour. They stumble across a mugging and intervene managing to save a young man and woman from the muggers. Well Chou does most of the actual work but Reid gets a taste for playing the hero despite not really doing much

Later they decide to establish themselves as crime fighters with a difference, so they cannot be held to ransom by genuine criminals (because the good guys have to worry about doing the right thing, saving the girl and so on) they decide to pose as criminals themselves to undermine criminal empires from within.

After building a car outfitted with more gadgets that James Bond’s Aston Martin the pair travel the city destroying criminals but soon manage to run afoul of the local crime boss Benjamin Chudnofsky (Christoph Waltz), a man trying to unite all gangs in Los Angeles under his own control to create his own criminal Empire.

We have a hero pretending to be a criminal in order to undermine the criminal elements from within…what could possibly go wrong??

Quite a lot as it turns out

Given that Seth Rogen is involved not only in starring in this film but that he also co-wrote the screenplay with Evan Goldberg it is pretty much a given that the proceedings will be fairly tongue-in-cheek. However, The Green Hornet is not quite tongue-in-cheek enough and doesn’t seem to know if it falls into the category of a comedy with some action sequences or is an action film that has some comedy elements. The ultimate choice regarding its classification will be down to the audience but they may walk away not sure what they have just witnessed. There are some funny moments but unfortunately most of the jokes the audience will see coming a mile off, because it has to be said that American humour is not exactly subtle in its approach.

Acting wise it is Christoph Waltz who steals the show with his portrayal of Russian mob boss Chudnofsky who seems a little bewildered by the appearance of The Green Hornet but ultimately decides to reinvent himself as an over-the-top bad guy. His opening few minutes sitting opposite James Franco (in a cameo appearance) is probably the funniest moment in the whole film. Chou works hard to make the action sequences believable unfortunately due to the post-Matrix world cinemagoers now live in, there is the usual slowed-down-time effect in which Kato seems to be able to focus with almost inhuman speed.

Seth Rogen’s particular brand of acting will sit well with his fans but for those of us who are largely indifferent to him and his previous films, his performance as the arrogant Britt Reid who claims all of the glory as The Green Hornet whilst negating what Kato does, may fall rather flat. Plus Seth Rogen tends to play Seth Rogen, he is no Jonah Hill who takes on different characters with different degrees of success, Rogen has found popularity playing the lovable bloke next door and seems completely happy to remain in that role. In The Green Hornet I found it tricky trying to cheer on a guy that I personally viewed as being an arrogant dick who has never had to work a day in his life, and now he is finally doing something worthwhile wants to hog the limelight. Reid is the rich-kid who wants the fame and glory, and is effectively nothing without Kato’s martial arts, or the inventions that he has developed to help the two fight crime.

Cameron Diaz is also on hand to provide a little eye candy and to be The Green Hornet’s unofficial mastermind.

DC need to get their act together and either create a Cinematic movie universe like Marvel or put some more effort into their films because they are in real danger of being left behind as Marvel puts out one blockbuster after another.

All in all whilst The Green Hornet is not the best superhero film out there it is definitely not going to be seen as the worst either. However there isn’t much about it that will leave the audience wanting to come back for either a re-run or a sequel. Personally if someone asks me about The Green Hornet chances are I will shrug indifferently and say “Meh…It’s alright” fans of Seth Rogen will probably enjoy it but for me my Thumb is Horizontal because whilst it is entertaining enough Reid is a dick hogging the credit but the car is cool and so is Kato. 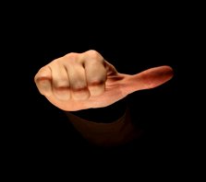 4/10 – I think if you happen to like Seth Rogen playing Seth Rogen then you’ll enjoy this film, as I am largely indifferent to the guy I would say that The Green Hornet is an okay film but nothing special.