Let me start off this week by posing a question: What is the purpose of a trailer?? In my opinion a trailer is supposed to tease you with tantalising glimpses of what is going to happen in a film or TV show, yet it seems that in recent years trailers give away so many spoilers that they are ruining key elements that major twists are given away before audiences have even sat down to watch. 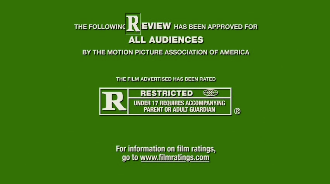 I have had various rants about trailers spoiling key plot points that would otherwise have been amazing or deliberately misleading audiences by showing flashes of people or props that actually have nothing to do with the film itself.

From my recent reviews cast your mind back to Terminator Genisys in which the trailer quite happily informed us that John Connor is now a Terminator and is basically now being controlled by Skynet. Humanity's greatest protector has become its greatest threat…now if we hadn’t known that John was a Terminator then this twist could have been amazing. Unfortunately when he appeared and was shot by “Pops” Reese’s argument that this could have been what Pops was sent back to do completely falls on deaf ears because we know John is a new version of a Terminator. The trailer could have shown us points of the plot, could have shown us John Connor but it did not need to give away that plot point, so why was it done??

I believe the technical term is “going off on one” and that is exactly what happened when I reviewed The Amazing Spider-Man 2 because the trailer wrote cheques that the film could not cash. We saw the Rhino, Doc Ock’s robotic arms, the Green Goblin, Electro and the Vulture’s wings…the set-up for a Sinister Six movie was lying spread eagled just waiting to be established but no. The Vulture, Doc Ock, and the woeful appearance of the Rhino seemed to have only be there to make us think a Sinister Six movie was on the horizon. Including the fleeting images of the props in the trailer was clearly just deigned to make us think we were about to see something epic instead of a massive pile of horseshit.

I remember a time not too long ago when a trailer was designed to just give an insight into the movie’s general features, no key plot points were given away, and I am not talking about this happening decades ago. The trailer for Underworld Evolution remains one of my favourites because it showed us that a powerful immortal had returned and it was going to be up to Vampire Selene and newly created hybrid Michael to battle him before an army of lycans was unleashed. As it turns out this wasn’t exactly what happened but then that is my point, the trailer made me want to see the film, and whilst the film was different to what I was expecting it was still good.

Nowadays, so much is crammed into a trailer that everything is given away, most recently Superman V Batman Dawn of Justice in which we saw Batman, Superman and Wonder Woman standing shoulder to shoulder preparing to take on Doomsday. So a film titled Superman V Batman was going to feature both Wonder Woman and Doomsday as well as the two titular superheroes. Personally this ruined the film for me because I knew what was going to happen…Superman and Batman would put their differences aside to fight a greater threat…blah…blah…blah…

I have to say that I am beginning to loath seeing trailers for upcoming films because too much is being given away…it was made clear that Spiderman was going to be in Captain America Civil War because he was referenced that the end of Ant-Man but which side he was on was unknown. Thanks to the trailer it seems that he has joined with Stark…and we know exactly which scene he is going to appear in so the anticipation of awaiting his arrival in the Marvel Cinematic Universe has already been spoiled. You aren’t going to be guessing. You won’t be trying to examine every scene in case he is in the background before his official reveal because the trailer has already shown us how and when he will make is appearance…and that just sucks… 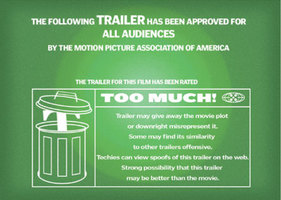 See what I mean?? Why isn’t that advert in the front of any and all trailers so you have the option of sticking your fingers in your ears and going…lah…lah…lah…until the trailer is over. Seriously there could be a vibration in your cinema seat or something, if you don’t want an upcoming film ruined then stick your fingers in your ears and shut your eyes until you feel the buzz of your seat.

Why has this happened though??

Why do trailers show so much so soon??

Honestly I don’t know, perhaps discussion forums or fans crashing movie sets or something has become such an issue that the spoilers might as well be given away by the film makers themselves. Maybe in the age of the internet when people can go see a film and spoiler everything just to be a dick, films have to out dick the dicks by giving away all the good stuff before the internet trolls can.

I cannot answer those questions, all I know for sure is that I am tired of trailers giving too much away and if I have to deny their existence completely just so I can enjoy an upcoming film then that is precisely what I will do.

Does this week’s review have a point or is it more of a rant??

It’s a bit of a rant, I don’t want my films spoiled, and I don’t want my TV shows ruined so perhaps as a community we need to band together to tell film makers that we want a trailer to tease, to tantalise, not ruin everything good about a film.