This week I have to admit that I was struggling for something to talk about, there are a bunch of films that I could have discussed but I was not in the mood for a film review. I was half watching game play from Batman Arkham City and then it hit me, I am going to talk about my personal favourite boss fight. 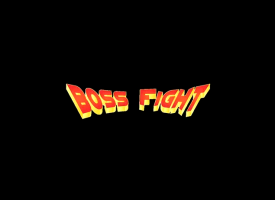 For those non-video gamers out there, one of the main staples of a video game are various boss fights. My first ever boss fight was in Sonic the Hedgehog when I had to take on Dr Robotnic, who was in a flying vehicle, and had a ball with a chain on the end which he attempted to hit Sonic with. A few whacks to his machine, it blew up, he flew away and the game resumed. At the end of the Stages, which generally had 3-Acts he would appear with his signature theme tune with some deadly weapon that could be destroyed by jumping into it several times.

Even in that first game the boss fights were varied and always fun to do.

Of course in Sonic when every button was jump, it was hard to evolve the fight to anything more than bash the machine until it blows up. As games developed, so did their boss fights, and generally they became a staple of the skills that a player had been honing as they played the game. As you learned to use gadgets or your environments to your advantage, the bosses would often do the same.

However, it is sadly a feature of a lot of games that the boss fights become dull and repetitive processes. Typically there are really only a couple of ways to have a boss fight, the first is to have some super powered opponent who’s attacks you dodge, until you learn their patterns or spot their weakness, at which point you jump in land a couple of hits, retreat before you...rinse, lather, repeat. The second involves wave after wave on enemies until you beat some preset number of henchmen before knocking out the guy in charge and the boss fight is over.

Any fight that you can win by basically button mashing is not really much of a fight with games escalating the difficulty by increasing the amount of enemies to deal with.

Some are even more phoned in than that, the end of Aliens: Colonial Marines springs to mind when you basically hit a couple of buttons, there is a final cut scene, and game over.

Of all the games that I have played over the years I can really only think of two stand-out fights and I want to talk about them.

The first was a battle with an ancient Sniper named The End in Metal Gear Solid: Snake Eater. The battle takes place over three different areas of the game with you, as Snake, having to track down a man who is capable of sneaking up behind you if you aren’t careful. I remember there being moments when I would run to a new spot and the camera would change to the perspective of my enemy whose sights were trained on my position. It was quite an adrenaline fuelled battle as you hunt someone hunting you. I bumbled out into the open on one occasion and a cut scene triggered in which he walked up behind me, shot me in the back, and the fight was over.

What was so interesting about this battle was that he could be anywhere in three large areas and you had to use your tools plus wits to beat him.

I also learned that there were two ways to avoid the fight, the first was right after a cut scene earlier in the game, when you could snipe The End when he was in a wheelchair. The second was by starting the fight then not playing the game again for a week, (or moving the date on your console forward) and loading the game up again to find out that The End died of old age during the time you weren’t playing.

It was so ludicrously created and was a great boss fight.

It wasn’t about going into things guns blazing, it was about patience, tactics and using the tools available to you in order to get the edge over your opponent.

The second fight I want to talk about was against Mr Freeze in Arkham City. Similarly to The End in MGS Snake Eater, you cannot rely on dodging Freeze’s attacks then jump in when he’s vulnerable. This is because Freeze pays attention to the means you employ to attack him and modifies his tactics so that you can never use the same strategy again. It fights so beautifully into the context of the game because you have to use all of the tools in Batman’s arsenal.

In a game that was filled with fight after fight with generic henchmen it was a massive highlight to have such a creative battle with a tragic villain.

Like I said above of all the games that I have played over the years, these are the two that stick out most in my mind because they were not just more of the same. I have played good games, and great games, but by and large the boss fights boil down to the same thing. Dodge, find a weakness, attack, and keep going till they fall over.

It was a real treat to battle both of these highly cunning and creative opponents, and whilst I said at the beginning of this article, and titled it my Favourite boss fight, I think I shall amend that to my Favourite Boss Fights as I really can’t decide which was better.

It is a pity that Boss fights can be so lacklustre or repetitive in games, but as these two shining examples prove, it is always more fun when video games force you to use your wits and skills to defeat your in game adversaries.