Hollow Man is a 2000 science-fiction horror film directed by Paul Verhoeven that stars Kevin Bacon, Elizabeth Shue and Josh Brolin. In the film scientists are working on a serum that can make a person invisible and a second serum that can make them visible again. The serums have worked on animals, but when one of the scientist’s takes the serum he slowly goes mad as he delves into the power of being invisible. 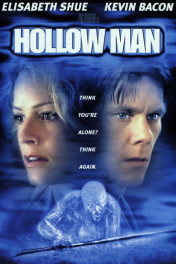 Director Paul Verhoeven has had his ups and downs, he directed Total Recall, the good one with Arnie, not the shit remake with Colin Farrell and raised a few eyebrows (amongst other things) with Basic Instinct. However, like most directors he has directed films that he would probably rather forget like Showgirls. The question that hangs over this film is this: is it going to be another classic like Total Recall or a pile of horse shit that he probably wishes he had never been involved with??

Dr Sebastian Caine (Kevin Bacon) is a brilliant but megalomaniacal molecular biologist who is the leading a team that are developing a serum to turn someone invisible for the US Military. He and his team are working on making a gorilla (that they have already made invisible) visible again. It turns out that making something invisible is easy; it is bringing them back that is hard. Sebastian works on the serum with his team including two scientists, one being his ex-girlfriend Linda McKay (Elisabeth Shue), and the other is Matt Kensington (Josh Brolin). Due to their work involving animals his team has a pair of vets, Sarah Kennedy (Kim Dickens) and Carter Abbey (Greg Grunberg) along with two technicians named Frank Chase (Joey Slotnick) and Janice Walton (Mary Randle).

Unbeknown to the military, the team successfully manage to make the gorilla Isabelle invisible and visible again. Sebastian chooses not to tell his bosses that they have succeeded so that he can become the first person to be made invisible.

Linda and Matt know that they don’t have authorisation to continue into human trials, but they are won over by Sebastian’s arguments. The rest of the team are unaware that they have not got authority to continue the experiment on a person but are initially excited about the prospect of transforming one of their own into the first person to become invisible.

Sebastian is given the serum and becomes invisible, over the next few days he has some fun with his invisibility, and the rest of the team prepare to change him back. However, the second serum doesn’t work and Sebastian returns to being invisible. As the realisation that he may be trapped like this for the rest of his life starts to sink in, Sebastian grows increasingly unstable, eventually descending into madness.

Right, so a scientist takes an experimental serum, transforms in some way, and then begins to descend into madness…ahem…The Invisible Man anyone?? So obviously the plot is not exactly original, man makes himself invisible and goes crackers terrorising those around him, however, what is really original are the special effects which are absolutely incredible.

If we’re being honest the acting really takes a back seat to the phenomenal special effects.

Kevin Bacon’s character is seen to disappear a layer at a time, his heart is visibly beating in his chest and his internal organs are continuing to function. You truly believe that you are witnessing a man becoming invisible, the detail of the organs, and how they move is really stunning.

During the course of the films, he is made visible several times when he is glimpsed through smoke or when he is water, each time he is only there for a fleeting moment. Blood is thrown on him at one point but only parts of the blood land on him so bits of his face and hair are visible but the rest of him is not.

Credit where credit is due because Bacon himself endured hours of painstaking make-up application, or wore contact lenses to cover his whole eyes which trust me is really uncomfortable. Plus even when his not ‘seen’ he was on the set acting out the parts his character was in even if he was then removed from the final film.

The special effects are magnificent and the audience can really believe that they are watching an invisible man. Caine is sitting in a chair with something on his head or clothes on, and the only thing the audience can see are the clothes, but not the man inside them.

The music score also adds to the creepiness as there are moments when the others are discussing if he is becoming unstable and a chair will turn on its own letting the audience know that Sebastian had been in the room listening to his colleagues the whole time.

Sebastian Caine is a megalomaniac, who makes jokes about being god. Even so, he is essentially a decent guy who has his issues but appears to be basically harmless. After realising that people trust what they see, and if he cannot be seen then he can effectively do whatever he wants he slowly becomes drunk with the power of being invisible and realises that the only way he can ever be free is to eliminate everyone who knows what he is. As he says “It’s amazing what you can do when you don’t have to look at yourself in the mirror anymore”. It follows the same idea of what a person would do if they realised they could do anything they want without consequences

Bacon’s performance is exceptional and he allows the audience to see the real possibilities of being invisible. The supporting cast go the distance from being excited about being unseen to being terrorised by the invisible man.

The special effects and Sebastian’s journey are the focus of the film, unfortaunetly, whilst some of the rest of the cast are pretty descent, there is one person in particular who really, really gets on my nerves. Namely Elizabeth Shue as Linda. I’ll talk about her in a minute or two…

The rest of the cast are decent enough and it is Greg Grunberg that steals a lot of his scenes as Carter, a easy going guy who believes that becoming invisible is cool and unknowingly encourages Sebastian to start really toying with people after he leaves the lab to head into the city. I can’t really remember much more about the rest of the cast as they are effectively just there to be terrorised then die.

Josh Brolin is fine, he is basically just another egg head but it is his new relationship with Linda that becomes a focus for Sebastian’s obsessions. Basically, the tension between Linda and Sebastian is one of the focal points for his anger as he realises that she is involved with Matt. He seems to have something of an obsession with her, and it is implied that she left him because he was so involved with his work. He obviously has some bitterness about the fact that she has moved on and started a new relationship whilst he is still trapped by his work. So we have a jealous ex but the thing is that Linda has kept her relationship with Matt a secret from him. Whilst I am not saying that she is leading Sebastian on, there are occasions when he is being very flirty or obviously about to push her against a bed and have his way with her, and she moves away but gives him a smile as she walks away indicating that his advances weren't exactly unwelcome.

Whilst it is not exactly an easy thing to hear when your ex tells you that they are seeing someone else, you do what normal humans do, you shrug, and say “okay” then probably mutter "bitch" under your breath. Personally when my last girlfriend on Brian dumped me for a squid-like creature named Gerald, I responded by setting her on fire and carving my name into his chest…hmmmm…good times…I really miss dating women of my own species. On this world if you did something like that you’d have “issues” that would probably land you in prison…anyway my point is that…Linda should have had enough respect for Sebastian to tell him that she has started seeing someone else. Hell, Matt could have spoken to him, man-to-man and said “Look buddy, Linda and I…there’s something there and we want to see where it could go, are you cool with that?” See how easy that would have been?? Just talk to the guy, you are friends so don't go behind his back, just...talk to him. If Matt had spoken to Sebastian, perhaps over a beer, then maybe Sebastian wouldn’t have been so angry when he discovered the truth becuase his friend had the decency and balls to tell him to his face.

Still it is not just Linda’s dicking Sebastian around which made me dislike her, it is the fact that when Sebastian makes himself invisible Linda is the one in charge and she relishes just ordering others about. Whenever Sebastian does anything she threatens to go to the Committee that gave them the grant to conduct their research. She has all the charm of a whiny school child running off to tell the teacher when someone does something she does not like. As Sebastian starts to go slowly more and more insane she doesn’t recognise it. She instead intentionally winds him up even more over the fact that she is totally over him and he now has to do what she says whilst leaving him alone and isolated in the lab day after day. I really wanted her to die but obviously she is one of the "heroes" and naturally she manages to make it to the end credits, seriously, what happened to the endings in which we are left to wonder if perhaps the bad guy managed to survive and is now free to roam the world unseen???

By the way, when you are watching this film, look at what the scientists do to make the gorilla visible that they don’t do when trying to get Sebastian back…I am no scientist but even I spotted the missing element that results in Sebastian returning to being invisible after being given the serum to become visible again.

The special effects are great and I cannot fault Bacon’s portrayal of Sebastian’s slow decent into madness.

Unfortunately Shue is so irritating, and when you are actively rooting for the villain because the “heroes” are so unlikable then they have failed to bring you into their plight.

As I have written this review the things I liked have been diluted by the things I didn’t so whilst I was intending to give this a Thumbs Up I cannot in good conscious do that because I wanted to stab Linda in the chest and say to Sebastian “Go on old horse, go nuts, kill them all”. Therefore my Thumb has slipped into a Horizontal position, watch it for the special effects and if you want to see Bacon portraying a bad guy for a change. 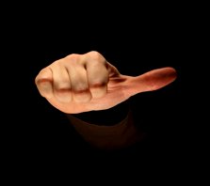 6.5/10 - The special effects are incredible and Bacon manages to give Sebastian’s transition some depth despite him being mostly unseen for the majority of the film, sadly, Shue is really annoying and why couldn’t we have been given a better ending rather than the usual good triumphs over evil bollocks