Released in 2012 and starring (bizarrely) Liam Neeson with singer Rihanna, Taylor Kitsch and a bunch of other people that you’ve probably never heard of. Battleship is a military science fiction film that is very loosely based on the classic board game or video game that you may come across in various pubs.

You know that board game you played as a child or turned into a drinking game as an adult?? Well, haven’t you always wanted to see a big screen adaptation of that game?? No of course you haven’t because you may have a brain in your head. Unfortunately Hollywood does not care about common sense and decided after the success of other board game turned films like…er…oh that’s right no one has ever done this before because such a thing is completely and utterly stupid…still they cracked on with making Battleship anyway.

In 2012 Battleship, the film no one asked for or wanted, hit the big screen. That scream you just heard inside your head was part of your childhood dying, because to say that this film is bad does not even come close to doing it justice, but as I enjoy inflicting pain on you puny humans, let’s take a look…

NASA discovers a planet that is similar to Earth in 2005 and in 2006 build an array that transmits a message into the void hoping to contact the other world. Meanwhile we are forced to watch a slacker named Alex that breaks into a store to impress some eye candy, he is arrested and is forced to join the Navy by his older brother. Now jump ahead to 2012 and aliens suddenly land and start attacking various ships with no explanation of why forcing Alex and his crewmates to fight them off.

Yep, that is pretty much it regarding the plot. So aliens have invaded, they are technologically superior to humans (okay they get a point for authenticity) and not surprisingly it is the American Navy and a hot headed lieutenant that must stop them.

For the majority of the film the aliens encase three battleships in a dome so Liam Neeson is in command of a vessel that is outside the dome so cannot really do much to help those inside, what the hell he is doing in this film is anyone’s guess. The radar used by the military is unable to effectively track the alien ships, fortunately, the Japanese who were engaging in a war game exercise with the Americans have put up a series of sonar buoys that change colour when an alien craft gets near to them. So they are using a grid to track the aliens, and send missiles to their projected paths…just like you do in the board game…no wait you don’t actually do that in the game because your targets don't move

This film is bad, so very, very bad, the idea that a board game would make a good transition to the big screen is so stupid that it should have been laughed out of the room when someone suggested it. How could anyone have thought that this would be a good idea?? This film is a shameless rip off of the Transformers movies and exists to demonstrate the special effects, so, okay how do the special effects hold up??

Admittedly they are quite impressive, unfortunately there is nothing new on display because the special effects have been done before in the Transformers films. You cannot carry a film with nothing but special effects, and as for the acting, it is atrocious. Alex is an arrogant dick that naturally got the girl who wouldn’t initially give him the time of day until after he broke into a convince store to get her a burrito or something. Is that really the key to getting your attention ladies?? If a guy wants to get noticed he should just break into the nearest pasty shop?? I have never understood why slackers are always seen to have “special skills” in bad films but naturally always waste them, there is nothing likeable about this prick, and how are you supposed to be rooting for a guy that should have crashed and burned years ago but somehow keeps succeeding despite his considerable personality flaws.

The decommissioned Battleship the Missouri features in the film, now this vessel was the setting for the far superior film Under Siege. Here the vessel is dragged out of mothballs to go after the alien ships when the modern battleships are all destroyed. Yes, the Missouri is used to take the fight to the aliens. Now you may be asking yourself how a decommissioned battleship can do what a modern battleship failed to do, but don’t worry there are reasons…what reasons you may ask…well Battleship doesn’t feel the need to actually tell you. Thankfully it is at this point that we get to see Alex demonstrating his “skills” because under his command the Missouri not only fights the alien mother ship, but it does this by utilising a power slide to turn all of its weapons on the alien craft all at once…yes, you did read that right. A Battleship…does a power slide…I would have thought that the ocean would have made that physically impossible but apparently not. Build up some speed, drop the anchor and execute a power slide…simple…it makes me wonder why the Ark Royale or the Abraham Lincoln haven’t adopted such tactics in ship-to-ship combat

It should come as absolutely no surprise that my Thumb is Down, how anyone could have possibly thought making a film based on a board game had anything other than failure written all over it is beyond me.

By the way, when my people arrive there will be absolutely nothing that your military can do to stop us from wiping all of you out 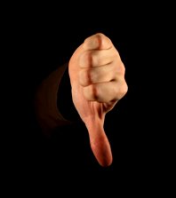 2/10 – The special effects are pretty good and the scenery is nice, but honestly there is no reason to watch this shit.  The story is beyond ridiculous and the fact that the Missouri appears is more tragic than anything else because it was the perfect setting for the much better film Under Siege.