I have touched upon this subject matter before, but like Star Trek The Next Generation I haven’t actually talked about who was the best Clark Kent. Now I need to make it clear right now that I am not interested in discussing Superman, the Man of Steel, the Last Son of Krypton, etcetera, etcetera, no, rather it is his alter-ego Clark Kent that I find much more interesting. There have been numerous versions of both Superman and Clark Kent over the years but my question is this: “Who is the Best Clark Kent?” 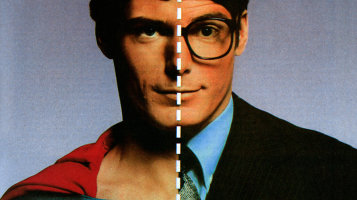 There are several ways that someone could interpret why an alien raised by a family from the Midwest United States dons a bright Red and Blue suit to help the citizens around him. I have had various pub conversations with friends of my skin sack over the years in which we have attempted to uncover what Superman’s motivations are. After all he is strong enough and fast enough to go unseen by the populous, there was an episode of an animated Batman show in which Superman donned the cape and cowl and had a whale of a time defeating Batman’s enemies who were suddenly finding the Dark Knight was impervious to harm. Basically what I am asking is why does he demonstrate his powers in such an obvious way when he could quite easily remain hidden all the time??

That is a question for various geeks and nerds to argue about till their hearts content, does Superman help because his human parents have instilled the desire to use his powers to make the world a better place or because he loves to see people raising their heads up to gaze in awe  at the man who can fly and practically worship him as a god??

Superman is only open to a couple of different interpretations, Clark Kent on the other hand, he is someone who is open to more questions. Now Superman or Kal-El is, in most interpretations, built like a brick shit-house. It doesn’t really matter which of the more recent actors you look at because they all have that particular thing in common, they all look like bodybuilders. 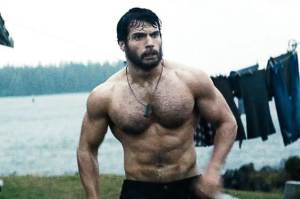 Henry Cavill in Man of Steel… 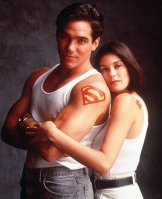 Dean Cain in Lois and Clark The New Adventures of Superman…

See what I mean??

This guy is supposed to be an unassuming newspaper reporter, now I am not saying that a news reporter couldn’t be buff, but the thing is that the only thing that hides Superman’s famous face is a pair of spectacles, so you’d think it would be harder for people to link the stuttering and bumbling Clark Kent to the Man of Steel. Only that’s the other thing, in Lois & Clark The New Adventures of Superman, Clark wasn’t a stuttering and bumbling, socially awkward man, he was a confident, well spoken, kind hearted man who was willing to help anyone in trouble. Wilful suspension of disbelief is one thing but Lois not figuring out that Clark is Superman when Clark always runs off to do something right before Superman shows up boarders on the retarded. Naturally for the sake of the show, she had to be written that way, but it didn’t mean that it made much sense.

Now Henry Cavil is the current Superman but considering his only outings have been in Man of Steel and Batman V Superman we haven’t seen much of him as Clark Kent, this leads me back to Superman Returns in which Brendon Routh stepped into the role, the thing is that one of the reasons he was chosen was because he looked remarkably similar to the last actor to play the Man of Steel on the big screen…Christopher Reeve.

Take a look at him… 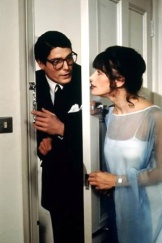 What do you see when you look at his man??

I see a lanky, shy, and socially awkward man that wears a pair of oversized glasses and is obviously nothing like the confident, powerhouse that is Superman. Even when you look at the two of them side by side, would you really think that Clark Kent and Superman are one and the same?? 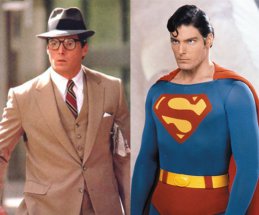 Remember when I did that article about the Quintessential Bond Moment, if you haven’t just flick to it and give it a read, it’s titled The Quintessential Bond Moment, I was going to call it the Tales from the Lands of the Butterscotch Kingdom but I know how you humans are, I need to spell things out for you. Anyway, the point is that different Bonds have had their own “Bond Moments” (well except Daniel Craig but let’s not get side tracked). However, the same hasn’t applied to the incarnations of Clark Kent, in fact whilst there have been numerous “Superman moments” there has only ever been one occasion of a Quintessentially “Clark Kent” moment, and it happened in Superman The Movie which defines Clark Kent and sets him a thousand miles away from the Man of Steel.

Clark and Lois are taken off the street at gun point by a mugger that demands their money, Clark as the cowardly country-boy just wants to get the ordeal over with so he tells Lois to hand over her money. After dropping her bag Clark apparently begins to panic, he sounds afraid even terrified, and really seems to be struggling to keep things together, Lois tries to kick the mugger and he steps back firing the gun. Now in the time before there was such a thing as bullet time, you see Clark snap out his hand in front of Lois in a blink and you’ll miss it slowed down time effect before he slumps to the ground. The mugger runs off as Lois crouches down beside him trying to see if he is alright, it is at this point that he looks up at her and apologises for “fainting”. The look on Lois’ face is priceless and says everything, she rolls her eyes at the six foot wimp that is now one of her colleagues. She gets up and walks away, leaving Clark to open his hand and smile at the bullet in his palm, he casually throws it to the floor before grabbing his coat and following after her.

In that one scene we see what makes Christopher Reeve the best Clark Kent, he embodies the character of the man hiding in plain sight, there is no wonder that in the original films Lois never catches on who he is because his disguise is so good. This version of Clark accepts the role of the downtrodden doormat, Lois bosses him around, she’ll happily send him to the shop on the corner to get her coffee or send him out to pick up her dry cleaning, and he does it. In the second film she starts to realise that Clark isn’t around when Superman is after Superman just happens to be at Niagara Falls at the same time Lois and Clark are there, so she jumps into a river, but Clark "rescues" her whilst managing not to reveal his identity, and once again makes himself look like a bumbling idiot. Lois is left kicking herself for even entertaining the thought that Clark is Superman. This version of Clark Kent knows that being Superman, and helping people means that when he puts on that suit and those glasses then goes to work he is going to be treated like a doormat by Lois and his boss Perry White. He is overshadowed by his alter-ego and he is able to hide in plain sight because he creates a persona that is the polar opposite of the Man of Steel.

In the first film he requests that half his pay check goes to his mother, so that is why he does it, he has to pretend to be a coward, he has to pretend to be socially awkward because he has to earn money to support his mother and himself. He doesn’t lie, cheat or steal and has to be part of the human race, and the human race work nine-to-five. Plus if someone does catch on who he really is, then his life and his mother are going to be under a microscope for the rest of their lives.

No other actors have ever been able to play the dual roles so well, Reeve was so good that they even put his face on Henry Cavil for a scene in Man of Steel. 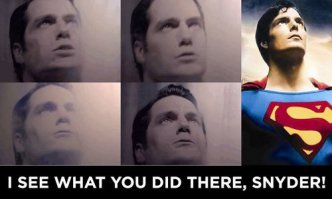 I also saw what you did there Snyder…

There has never been an actor who suited Clark Kent and Supermen so perfectly, Dean Cain, Brendon Routh, and now Henry Cavil…none of them could be Clark Kent as well as Superman. They may be able to play Superman well enough, but they are not Clark Kent, they don’t embody what makes it so hard for the world to realise that Clark Kent and Superman are the same person, because he played them so differently.

Christopher Reeve, is and always will be the best Clark Kent and Superman, it was a tragedy that he was paralysed in a polo accident and he was like so many great people that was taken before their time.