The film, made in 1983, is an adaptation that is based upon the novel by the master of written horror, Stephen King. The film was directed by John Carpenter (director of horror classic’s like The Thing and Halloween), and despite being made in 1983 the film is set in 1978. 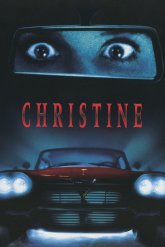 I do have a certain soft spot for older classic horror films like The Thing and of course Alien because I enjoy those moments when human cinema pushed the boundaries of what audiences were used to seeing. The Thing is just as terrifying as it always has been, and can stand alone without needed remakes or crap prequels. Stephen King is a writer who has been responsible for some of the most chilling stories that have been adapted into films, The Shining being a primary example. He books generally deal with some kind of almost unseen force driving the actions of the protagonists and manipulating their actions. One of the films made on a book of his was Christine in which a car is possessed, or has a will of its own, or something that allows it to act independently.

How can a film about a possessed car be scary you ask, well read on and I’ll tell you...

Young Arnie Cunningham (Keith Gordon) is the typical high school nerd that is picked on by the bigger kids but has a loyal friend in popular kid and football player Dennis Guilder (John Stockwell). Arnie buys a rusty hulk of a car that he starts to slowly restore to its former glory, as he does his friends and family notice a distinct change in his behaviour, he goes from being quite shy to being cocky and arrogant.

After the car, Christine, is restored to her prime, a group of bullies that Arnie got expelled from school for threatening him with a knife, break into the garage where he stores the car and trash it.

Arnie obsessively decides to bring the car to its showroom condition once more. He opens the engine and turns away, hearing a noise he turns back and finds that the engine has repaired itself. Standing before Christine, Arnie watches as his pride and joy heals herself, and then proceeds to track go after all those who damaged her.

There have been several of Stephen King’s books that have been adapted into films, and regrettably the majority of them have been either made-for-TV or were rather forgettable as films. Fortunately Christine does not fall into that category. John Carpenter deliberately hired relatively unknown actors so that nothing would take focus away from the car, indeed the only actor that might be familiar is Harry Dean Stanton who starred as Brett in Alien.

It is doubtful that any car fan wouldn’t watch Christine and wonder what it would be like to have a car that could heal itself, it being possessed (possibly by the devil) would be a downside admittedly, still, it would be nice to know that those dings and scratches would repair themselves. The car itself looks beautiful being a1958 Plymouth Fury and the shiny red paintwork makes the seemingly demonic entity lurking within the vehicle so much more frightening. 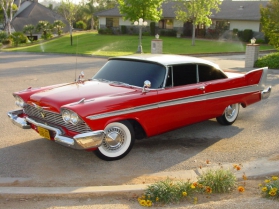 The above is a photo of one of only two surviving examples of cars used in the film, looks cool doesn’t it.

John Carpenter is a director that knows how to do more with less, the headlights on the car are used to great effect to create fear as the vehicle goes after those that hurt it. Similarly to the techniques used in The Thing in which the titular alien consumed its first victim off screen, Carpenter makes a point of not showing if Arnie is behind the wheel of the car during these rampages or not. Sometimes it is implied that he is and other times he is not. How he is drawn into this obsessive and possessive relationship with Christine is left as a mystery, with us never actually knowing what the car is. We don’t know if it is possessed, or an alien, or haunted, or what and that helps to develop the creepiness.

Acting wise Keith Gordon does fit the bill as the nerdy teen driven (no pun intended) to obsession by Christine as he slowly puts the car back together. His character change from quiet and shy to obsessed and cocky is slow and develops as Arnie focuses more and more of his time on restoring the car. His growing obsession causes concern for his family and friends who seek to understand why the car is able to have such a hold on him.

The special effects are also very impressive with the car seamlessly appearing to repair any and all damage to itself. The sequence in which Christine repairs all of the damage the bullies inflicted is very well filmed and edited making it appear the car is truly healing. In reality John Carpenter destroyed 21 Plymouth Belvederes during the making of the film, still, it was a small price to pay for what remains a modern horror classic.

Whilst not as well known as some of John Carpenter’s other films, Christine remains a very good example of modern horror. The audience never knows if Arnie is behind the wheel or if it is Christine acting on her own, and more than once the bright headlights spell doom for anyone caught in them.

I guess the problem with films that I like is there is not too much I can say about them other than, go and watch it. If you are sick of crappy horror movies with cheap CGI effects then dig out this example of classic horror. I am naturally giving the film and Thumbs Up and would urge any fan of Carpenter or cult horror films to check it out. 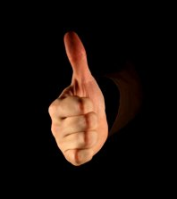 8/10 - Hair styles and clothing may date the film, but it is still an excellent horror in its own right with special effects that still hold up today. Any self respecting horror fan needs to track this down and give it a watch because they will not be disappointed.