Aired in 2001 and 2002 Hellsing was a Japanese television series that was based upon the manga of the same name. It was produced by Gonzo animation studios and was subsequently dubbed into English. Hellsing is not to be confused with Hellsing Ultimate because although the two do have similarities they are separate stories that are not be related to one another even though many of the characters appear in both.

I may have mentioned once or twice that I love vampires, in my opinion they are so cool and badass, when they are done right we get films like Blade or Vampire in Brooklyn, however there is a place for the romanticised version we see in various Vampire Chronicle novels or film adaptations. I have mentioned in several reviews that Twilight was an abomination that in my opinion was the worst thing to happen to vampires since…well…ever. A few years ago I came across a TV show on YouTube called Hellsing, it looked interesting and as I have discovered a number of really cool (and shit) anime shows and films by clicking on random links I checked it out.

For over a century the Hellsing Organisation has been protecting Great Britain from the threat that vampires present. Now Sir Integra Hellsing (voiced by Victoria Harwood), the last Hellsing and Head of the Organisation has learned that a new breed of vampire is loose on the streets. This vampire is one that can be artificially created using what is known as a ‘Freak Chip’. Her organisation’s greatest weapon is a Vampire in her service named Alucard (voiced by Crispin Freeman), and they are joined by an army of loyal soldiers. Also on their side is a newly turned vampire named Seras Victoria (voiced by K.T. Grey) and Walter (voiced by Ralph Lister), the Hellsing Family’s butler.

Working in secret the organisation fights to protect the innocent masses from the threats lurking in the night, and with Alucard, a genuine monster, leading the fight against all manner of nasty creatures, England appears to be well defended.

However, as the Hellsing Organisation investigates and steadily starts eliminating the new generation of vampires being created by the chips their Headquarters are attacked, they have to contend with interference from the Vatican and a monster coming to their shores that is every bit as deadly and dangerous as Alucard himself.

Alucard can be summarised in four words…ahem…stone, cold bad-ass, yes I am counting bad and ass as two separate worlds. That is how cool he is. As the Hellsing Organisation’s greatest weapon it is down to Alucard to hunt down and wipe out any enemies of the United Kingdom. I am not a hundred percent sure exactly why Alucard chose to serve Integra Hellsing, I think it had something to do with her standing up to him when she was a child despite the fact that he was clearly capable of ripping her apart, and impressed him enough to pledge himself to her. On the other hand he might have done it just so he had an excuse to roam the world destroying anyone that stood in his way for no other reason than he enjoys killing.

The Hellsing series is made up of thirteen episodes and whilst the series does all follow the same theme the main enemy Incognito (voiced by Isaac C. Singleton, Jr) does not rear his rather unattractive face until late on in the series. He is shown to be as powerful as Alucard and similarly to Devil May Cry the series builds to a very impressive climax in which the two immortals face one another in a fight to the death.

Animation-wise Hellsing is similar to the Devil May Cry anime in the sense that it deals with the day-to-day lives of the characters. With Hellsing this involves the struggle to keep Britain safe whilst building up to a stunning climax in which Alucard must contend with a creature that may be a monster even stronger than himself. As it is a series that has been animated and was primarily released in Japan before being dubbed into English there are times when the voices and the mouths don’t quite gel, however, anyone who watches English-dubbed anime will be familiar with this and will not allow it to interfere with the rest of the show.

Alucard is a character that like Dante in Devil May Cry just oozes coolness, and relishes opportunities to meet enemies in battle that might have a chance against his formidable abilities. Crispin Freeman clearly enjoys being the voice of Alucard, and the vampire is brilliantly twisted. Alucard is in the service of humans, like I said it is never revealed exactly why he serves the Hellsing Organisation, or who he is. Although there are clues to his identity which suggests the truth about who Alucard really is, and the greatest of these clues is literally in his name and will make sense if the audience simply spells his name backwards.

As with the Devil May Cry anime the biggest problem with Hellsing is that there are not many episodes, which is a shame because Alucard and the Hellsing Organisation are definitely worthy of additional episodes.

My Thumb is definitely Up because like Devil May Cry this is an awesome series with a really cool main character that sadly doesn’t have more than thirteen episodes. Still if you get a chance to watch this then definitely do it because if you are a fan of anime then you will not be disappointed. 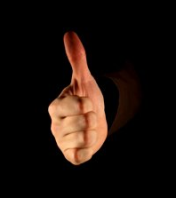 8/10 - Alucard is stone cold cool and it is a real pity that so few episodes were made. If you like vampires then you simply have to check it out and as you watch just imagine what Alucard would say and do if the sparkling Edward Cullen crossed his path.