Rockstar’s massive success with GTA Online led to the release of not only a sequel to Red Dead Redemption, namely...Red Redemption 2 but also a new open world sandbox for players to explore. However, unlike GTA Online which is set in the present day(ish) if you excuse the existence of flying cars and bikes, Red Dead Online is set in 1898, approximately one year before the events seen in the game. 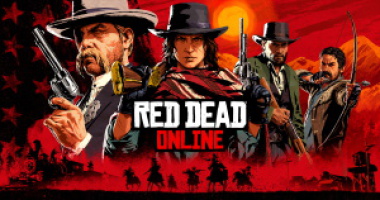 Now truth be told GTA Online has become my unwindy game, changing the MTU settings means I can play in public lobbies almost always solo, and don’t have to worry about my grinding, or business sales being interrupted by online dickheads. I have bought every property, have dozens of cars of all varieties, and have amassed over $50,000,000 in game dollars without paying a penny for Shark Cards. But, I am also getting to point where I play for the sake of playing, it is a time killer more than anything else. Having purchased Red Dead Redemption 2 before Christmas I decided to work my way through the story and also try my hand at Red Dead Online.

I have barely scratched the surface of the main game and RD Online so this first article is more of a first impressions than anything else.

So, as Abbie hates the appearance of my GTA Online protagonist I allowed her to design my RD Online protagonist, who I have just decided I am going to call Doug. Like the GTA Online counterpart he is also a silent protagonist which possibly explains why he was unable to object when he is arrested for murder then sent to Sasika Penitentiary. Six months into the sentence, whilst awaiting execution and assigned to a work detail, the prison transport is intercepted by a group of well-armed men who free the prisoners. Doug is introduced to Horley, the man in charge of those who liberated the prisoners, and is escorted to Horley’s employer Jessica LeClerk.

It turns out that Doug was a fall guy and Jessica LeClerk’s husband was murdered by his former business associates. LeClerk knows that Doug is innocent and wants his help in gaining revenge over her husband’s killers.

At this point you are free to begin wandering the wilderness and are guided to a mission in which you must steal horses. This mission is the first I have encountered which is a compulsory coop so I had to reset my MTU settings so three others could join me. My group and I hightailed it over to the stables to steal a horse each before getting the hell out of dodge. As usual there was pretty much no cooperation between us, we ran into the ranch, shot a few NPCs then jumped onto a horse. I did not choose a particular horse, I just jumped onto the nearest one and raced off to finish the mission leaving the other three guys in my dust. Once Doug arrived at the stable he was inexplicably given the horse by the stable’s owner, after which I was able to rename him, give him a saddle, and other customisations. It is also possible to ensure your horse, which works only slightly differently to GTA, if a vehicle is blown up you get a replacement. If your horse is injured then it doesn’t die, it is returned to a stable to recover from its injuries so you can use it once it is better.

I also acquired a camp at some point, which allows Doug to rest, tie up his horse and cannot be attacked by other players if it is flying a white flag which is nice. It can be upgraded which allows Doug to recover more stamina as Online has the same survival elements that the main game has. You need to eat and drink, plus have energy that wanes over time, so you need to keep an eye on your stats. How important they are I don’t yet know because I haven’t got to the point where they have run out yet.

Since then I have basically been wandering around trying to determine exactly what it is I am supposed to be doing. I imagine that trying to start GTA Online now would be a total mindfuck of different business, missions, heists and dickhead players attacking you at every step. RD Online seems to be trying to keep the focus a bit tighter, and whilst Doug can level up it seems that the level is capped at 100. So unlike GTA which allows players to presumably level up indefinitely, despite the fact that a player’s level doesn’t seem to matter for crap once you get past a certain point, everything in RD Online is building to that 100 level mark.

However, it seems that there are different levels with different professions and there is also almost a moral choice mechanic. Apparently your choices will reflect how you are seen by the authorities and others...but at this point that is as far as I have got. Similarly the four different professions: Bounty Hunter, Moonshiner, Collector and Trader all have levels and missions associated with them. The higher you are in that profession the more stuff you can unlock, and presumably the more money that you can make. I wondered if like GTA Online you buy a business then can pop back and forth between that and any others you own, but RD Online seems to want you to focus on one of the professions. Switching between them will slow down how fast you progress.

I think this could work as different players will be different which may encourage cooperation. Perhaps Collectors trade with Bounty Hunters. But as of writing I have barely started to get a grip with the game, and have heard that next week Bounty Hunter licences are going to be free so I’ll begin with that profession. The same Twitch Prime benefits that grant weekly bonuses in GTA also allow bonuses for RD Online so I will keep an eye on them as well.

Oh yes, I should probably mention that there is naturally currency in RD Online with both dollars and gold bars enabling you to buy stuff. Not sure how many dollars gets you a gold bar just yet, and I am not sure how long it takes to grind through different tasks to earn enough gold bars to buy licences, vehicles or buildings necessary to be one of the professions mentioned above.

If you are going to jump into the world of RD Online my starting advice would be twofold: one: tapping L1 draws and holsters your weapon because if your gun is out there seem to be about nine ways to fire it without wanting to, and two: remember that you are no longer playing GTA Online and your horse is not going to function in the same way as a car. That might sound obvious but in Los Santos if there is a mountain between you and where you need to be then you can happily race up one side and leap off the other not caring if your car ends up on its roof at the bottom because you can simply flip it back the right way up. The world of Red Dead Redemption and therefore Online is like Arizona, there are dozens of cliffs, hills, and uneven terrain that your horse will flatly refuse to ramp over no matter how fast you are tapping the X button to make it run at full speed towards it.

The game world also has animals in it that I’m sure serve a purpose that I will undoubtably learn more about as I get to grips with the game. Thus far I went on a mission to kill a wolf, I tracked it down, got mauled to death twice after my horse bucked me off, but I managed to kill it and returned its body for my reward.

Rockstar also seem to be trying to prevent the same level of griefing that plagues GTA Online as hostile players show up on your map in Red making it easier to avoid them. Personally the MTU settings seem to work just as well putting me in solo public lobbies so unless I have to interact with other players as I did in the tutorial then I will play alone for now.

So there you go, my initial impression of RD Online, undoubtedly this will be the first of many articles about the game so I will hold off on giving a Thumb and an out of 10 rating.

If you have Red Redemption 2 then you might as well give RD Online a go because it comes free with the main game. I am going to work through the main game as well, so at some point I will do a review of that too, just as I did for GTA 5.