The film is a biographical crime thriller told from the perspective of serial killer Ted Bundy’s girlfriend. The film was directed by Joe Berlinger and is based on the memoir The Phantom Prince: My Life with Ted Bundy by Elizabeth Kendall. The film stars Zak Efron, Lily Collins, Kaya Scodelario with John Malkovich and Jim Parsons. 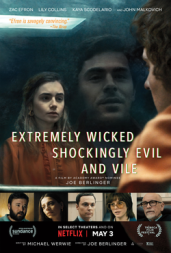 Abbie wanted to see this film as she has some interested in criminals and stalkers. I think perhaps that such concepts are so alien to most people that they cannot fathom how one human being could commit such brutal crimes against another human being, then smile in court like they haven’t got a care in the world.

In case you don’t know who Ted Bundy is allow me to give you a brief history lesson. Theodore Robert Bundy was a serial killer, sociopath, rapist, kidnapper, and burglar, who was also guilty of necrophilia. He assaulted and murdered numerous women and girls during the 1970s, possibly earlier, he spent years denying any wrong doing but was found guilty and executed in 1989 after confessing to 30 murders, although it was believed the number of murders he committed was actually much higher.

By all accounts Bundy was a charming and handsome man, who managed to win his victim’s trust before brutally killing them. During the 10 years he was on Death Row he continued to deny his crimes and even suggested that any violence on his part was because of the media or violent pornography. At his core Bundy was a manipulator who used his looks and his charm to commit horrific crimes upon unsuspecting women.

So, as you can imagine with such a charismatic and manipulative person it would be inevitable that there would be numerous books, documentaries, and films which charted his crimes and how he presented himself when in court. However, this is the first film (to my knowledge) that looks at Bundy from the perspective of his long-term girlfriend Elizabeth Kendall.

The film starts with Liz (Collins) visiting Bundy (Efron) in jail in 1989, she asks him if he remembers the first time they met and the film flashes back to Seattle in 1969 in which Bundy approaches Liz in a bar. The pair seem to hit it off immediately with Kendall taking him home with her, on the doorstep he learns that she has a child, but she invites him in and the pair fall asleep together. In the morning Ted has made breakfast for Kendall’s young daughter Molly, and Liz and Ted begin dating.

Jumping ahead to 1974, a news report details the disappearances of several young women, two in broad daylight, after a man asks the women to help him load a sail boat onto a Volkswagen beetle. A sketch of the suspect is released and in 1975 Ted is arrested. After he is released on bail he convinces Liz that the woman that identified him in a police line up was shown a picture of him prior to that as the police want to pin the crimes on someone and he is their target.

Liz stands by him even after he is found guilty of aggravated kidnapping and sentenced to serve one to fifteen years in Utah State Prison. A few weeks later he is transferred to Colorado to stand trial for murder, still Liz refuses to believe that Ted is guilty. Ted escapes the courthouse and goes on the run, only to be recaptured six days later, a disillusioned Liz ends their relationship but over the next few years Ted continues to contact her protesting his innocence...

My knowledge of Ted Bundy and his crimes is limited; the description I gave of him above was basically copied from Wikipedia. However, I did know that he was considered to be very handsome, charming, and even seemed to have a fan club of young women who claimed to be in love with a man that was on trial for a series of brutal murders. He presented himself as an innocent man fighting against a system that was determined to send him to prison or the electric chair for crimes that he didn’t commit. His only crime was being in the wrong place at the wrong time. I have seen various documentaries about him over the years and he was clearly smart enough to manipulate so many people around him. He always blamed his crimes on other people or scapegoats and whilst he confessed to 30 murders he never took responsibility for any of them.

According to Wikipedia this is the ninth film about him, there have been six books, and four documentaries about him as well. As I said above this film looks at Liz Kendall rather than Bundy himself charting how she initially stuck by him but later became disillusioned ultimately ending their relationship.

Zak Efron is an actor that has never really been a part of my world, Abbie knew him from the likes of High School Musical and its sequels, but personally he has never really crossed my path. I have to say that his performance in the film as Bundy is incredibly well done, he is able to convince the audience (and by extension those around the character) that he is an innocent man that could never commit the acts he is being accused of. In the closing credits footage of the real Bundy is used which mirrors scenes that were in the film and demonstrated just how well Efron encapsulates the role. Efron is a handsome guy so it is easy to imagine how such a man could use his looks to get what he wants from those around him.

I was also impressed with John Malkovich as Edward Cowart the judge presiding over his Florida murder trial who sees through Bundy’s charm to the monster that lies within. The title of the film was taken from a quote made by the judge when he was sentencing Bundy to death. Jim Parsons also did a reasonable job as the prosecutor and after his initial appearance wasn’t giving a Sheldon-esque performance as he detailed the crimes Bundy committed.

As for Lilly Collins, she did well as Bundy’s girlfriend and tries to stand by the man she loves despite the overwhelming evidence that stacks up against him. However, she also has the strength to leave him and try to move on with her life when it becomes obvious that he is a monster in disguise.

Unfortunately the story only loosely followed its own concept. Initially things are being shown from Kendall’s perspective but as the film goes on, she falls more and more to the wayside as things focus on Bundy and his manipulation of Carole Boone whom believes Bundy is innocent. Bundy continued to try and contact Liz proclaiming his innocence, but eventually she stops answering and her new boyfriend tells Bundy not to call any longer. It is a shame because the film had the potential to really examine Kendall’s character and how she was convinced that the man she started to share her life with was not the monster the media were proclaiming him to be. Sadly it was not to be and things ended up focussing on Bundy once again. If we’d have been seeing her watching the trials on the news or hearing news of his escapes instead of seeing things from his perspective then that would have carried some weight but it doesn’t materialise.

I was watching it wondering what Bundy was doing in Colorado and various other places where the victims turned up, and I mean that from the perspective of his girlfriend. We never see him telling her he is heading out to visit family or friends, or that he is going to legal conferences (Bundy was a law student at one point) or something. So how does he explain his absences to his girlfriend?? We don’t see any of those explanations nor do we ever get context of what he claims he was doing in the various states where his victims were found. Plus, if you are going to focus on Bundy’s girlfriend then surely we need more scenes of the two of them being happy, and yes they do a montage of scenes of Bundy, Liz and Molly being a family in the opening credits, but it is so brief we don’t really get any insight into the bond between the two. I get that if you do something like that then you run the risk of trying to make Bundy seem more human and more sympathetic, but is that not the point of the film you are making?? We need to see him as the family man to juxtaposition the horrific crimes he is accused of to explain why Liz cannot believe that the killer and the man she loves are one and the same.

Like I said the performances are generally really good with Efron as a highlight, however, as far as I can see, the film doesn’t add anything more to the story of Ted Bundy. Therefore why was it even made??

Plus after so many films, books and documentaries is it not time to let Bundy finally just begin to fade from public memory. Those that survived him are still alive and for their sake, and the sake of the families of his many victim and potential victims, shouldn’t filmmakers let the monster that Ted Bundy was finally die??

As far as the film is concerned Efron’s performance is worth a watch and he does capture the apparent charm of Bundy as well as his courtroom antics very well. But the film does not have the conviction to follow through with its own idea and begins to focus on Bundy with increasing frequency as the film goes on. I guess I’ll give the film a Meh response and leave my Thumb Horizontal as the performances are good but the story itself begins to focus more on Bundy with Liz falling more and more into the background. 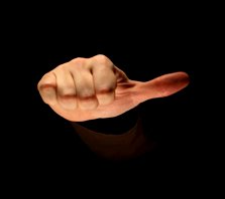 6/10 – I wasn’t taken in by the film and failed to see it as anything other than yet another film about Ted Bundy. It could have been more interesting with Bundy being only seen on the TV or read about in the news, but when things shift to his perspective it changes the film from focussing on his girlfriend to focussing on him, and that we have seen numerous times before.