From the man who created The Simpsons and Futurama for 20th Century Fox comes a new Netflix series: Disenchanted. Matt Groening has naturally had phenomenal success with The Simpsons and to a lesser degree Futurama so would his new series be more like the former or the latter of his creations?? 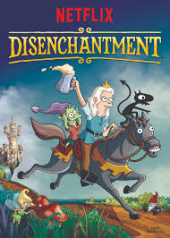 Before I go any further let me just give you a bit of background. Netflix have ordered 20 episodes of the series, the first 10 of which were released in 2018. Several familiar faces join the cast and lend their voices to some of the characters. John DiMaggio voices King Zog (he also voiced Bender in Futurama), Billy West as Scorerio (who also voiced Fry in Futurama), and Tress MacNeill who has voiced numerous characters in both The Simpsons and Futurama.

The series is set in a medieval fantasy kingdom of Dreamland and follows the adventures (or more accurately mis-adventures) of a Princess named Tiabeanie Mariabeanie de la Rochambeau Grunkwitz or “Bean” (voiced by Abbi Jacobson), an elf named Elfo (voiced by Nat Faxon, and a demon named Luci (voiced by Eric Andre).

In the first episode we learn that Zog is trying to marry his daughter off to the Prince of another kingdom so he can gain more power and influence. But Bean is less than excited about the prospect...so yeah, immediately we have a princess that doesn’t want to conform to the way princesses are supposed to behave...you know like Jasmine from Aladdin or pretty much any other female character who is ahead of their time. Not only is Bean not a “traditional” princess, she is also a heavier drinker, and is definitely no stranger to the pleasures of the flesh. Naturally she is a thorn in her father’s side who wants her to be normal and just do as he wants her to do.

One of the gifts that Bean receives on her wedding day is a demon named Luci that has been sent by two dark mages with the task of turning her evil. Fortunately Luci seems more interested in drinking, smoking and sympathises with her situation encouraging her to ditch the Prince she has been arranged to marry.

Elfo is an elf that works in a hidden land with other elves making candy, but he grows weary of his life and leaves his home much to the consternation of his people. He makes his way to Dreamland in time to see Bean refuse to marry Prince Guysbert, and escapes along with her, and Luci.

Bean eventually manages to get out of marrying anyone but her father begins to become obsessed with making the Elixir of Life, which requires elf blood. Unfortunately no one knows exactly how to make it and Bean spends most of her time trying to protect Elfo whilst having as much to drink as possible and Luci works to lead her more astray.

I think what a lot of people forget is how bad The Simpsons looked when it first started, the animation was very basic, the voices were not yet polished, the backgrounds were generic and lacked colour...the thing is that nowadays people forget what that show used to be. More often than not people tend to focus on how long the show has been going on and point out that it seems to now exist just for the sake of it rather than because it still has good ideas. It can take even great shows to take some time to find their feet, is my point, and so generally I think it is best to give new series a least a bit of time to find its niche before judging it.

However, I really enjoyed Futurama right off the bat as the ideas were creative, the animation was better, and the voice cast suited their respective characters perfectly. Billy West as the boyishly charming but idiotic Fry, Katey Sagal as the mutant Cyclops Leela with John DiMaggio as the robot Bender, they all fitted with the design of the characters that they were portraying. The universe of Futurama also had so much potential for different ideas, themes and had the potential to be really interesting plus thought provoking. The crew encountered Space-Bees, travelled in time, and even met a “God” entity. It survived for eight seasons before it ended and it seems that Matt Groening wanted to do something a bit more adult focussed for his next project.

In recent years adult animation has gotten more and more extreme, and I am not just talking about in Japanese anime. Anime productions have already been created that are very graphic, depicting brutal battles, sex scenes and blood spilling from beaten foes. Such styles have existed for years, but are not as mainstream as some of the American animated shows.

Seth MacFarlane was probably one of the fathers of a new style of adult animation with Family Guy pushing traditional boundaries as the seasons went on, and in my opinion America Dad! hit the ground running using its break out character Roger who was happily addicted to drugs, alcohol and is a lovable sociopath, psychopath, and mass murderer. The show frequently depicts drink, drugs, characters being killed and there has even been a sex scene between Stan and Francine.

Rick and Morty has also become ridiculously popular as legions of fans tune in to watch the adventures of Rick, the smartest alcoholic in the universe and his dumb grandson, Morty as Rick does whatever the hell he wants to complete his goals.

Disenchanted seemed to be Matt Groening’s attempt to do something a bit more adult but he cannot completely break away from the reigns that tie him to The Simpsons and Futurama.

Both of Groening’s former shows had numerous memorable characters from regulars to guests, with the cast suiting their yellow-faced alter-egos like gloves. Kelsey Grammar is always a highlight as Sideshow Bob and Dan Castellaneta couldn’t be more suited to give Homer Simpson his voice. Unfortunately whilst Abbi Jacobson does a decent enough job as the voice of Bean, and Eric Andre is okay as Luci, I don’t like Nat Faxon’s potryal of Elfo. The voice just doesn’t fit with the character. Every time he opens his mouth I hear a voice that doesn’t suit the little elf coming from his lips. I have a similar problem with DiMaggio’s voice work as Zog, he sounds too much like Bender for my tastes. The effect of this is that it just takes me out of the show, and much like when they changed the voice actress for Edith in Despicable Me 3 I find it quite jarring. If you are going to have a cute and cuddly character then they need a cute and cuddly voice, plus wouldn’t it be funnier if Elfo’s voice was saying things that you wouldn’t expect to come from such a softly spoken character??

Generally every character in the show could have been ripped from another source, Bean is the stereotypical tomboy who has that rebellious streak, and is happy spending her days sleeping and her nights drinking or screwing random strangers. King Zod is the angry king who is constantly disappointed by his daughter’s actions. Luci is a heavily diluted Roger that seeks to lazily lead Bean astray, as Elfo is basically the nerdy best friend who wants to get together with a woman that just sees him as a friend.

Yeah, Elfo wants to get a piece of Bean, now I’m not honestly sure how things work in this fantasy world as King Zod’s wife is a humanoid amphibian, that Zod managed to have a son with. So Bean and Elfo could be anatomically compatible but wouldn’t that be like trying to stick a sausage in a wizard’s sleeve?? Bean makes no secret of the fact that she is far from a virgin which might mean that Elfo might not even touch the sides anyway if she ever consented to have sex with him. Plus one of the things I never understand with people who sleep around is why they are picky, if Bean will pretty much bang anything that moves, then why the hell doesn’t she have a roll in the sack with Elfo?? It is implied that she has bedded far worse in her time so why not let the little guy have a go on the kingdom’s bike??

I wouldn’t say that is disliked Disenchanted as I did stick with it to the end of the first 10 episodes and will watch the next 10 when they are released. However, unlike Futurama which I enjoyed right from the off, Disenchanted seems to be a much slower boil. By the end of the 10 episodes not a great deal has actually happened, everyone is pretty much in the same place they were when the series started. Bean is still a tomboy, Luci is still working to lead Bean astray and Elfo...well, I won’t spoil but suffice it to say he hasn’t yet got a chance to flick the Bean.

I am going to leave my Thumb Horizontal because this isn’t a bad show, and the animation is good, unfortunately it is not one of those shows that I am going to race to see once the next 10 episodes come out.

May advice is if you have Netflix and are a fan of The Simpsons and/or Futurama then you might as well check it out. If you are more interested in adult animation then you’re probably not going to get your fix from Disenchanted, so you’re better off tuning into Rick and Morty, Family Guy or American Dad! 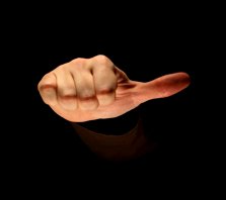 6/10 – Not a bad show, and it was entertaining enough to keep me watching to the end but it lacked the colour of The Simpsons, the imagination of Futurama and the stones to go truly adult like Rick and Morty or American Dad!